Leadership: can you put it in a wheelbarrow?

“Learn from the people Plan with the people Begin with what they have Build on what they know Of the best leaders When the task is accomplished The people will remark We have done it ourselves.” - Lao-Tsu’s Tao Te Ching 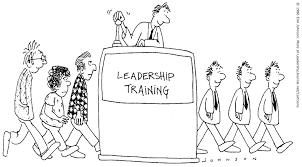 The ‘traditional’ perception of leadership is great for Arthurian romances where the hero leads from the front – the first into battle and the last to leave the battlefield. The role model par excellence.  And this approach still resonates: many of us evidently expect the Prime Minister to be a ‘hero’ figure with an answer for everything (including the price of a pint of milk), locked in constant conflict with the dragons that be Jeremy Corbyn and the bureaucrats from Brussels – effectively a civilian mirror to the image of the all-conquering military leader.  It’s also a common analogy in the world of sport (although it’s worth noting that England’s successful rugby team has been transformed by an emphasis on having fifteen leaders on the field, each encouraged to take individual responsibility and to be a key decision-maker in their own right. Compare that to the hapless football team…)

However, the great leader syndrome is also still prevalent in the world of business – but is becoming increasingly redundant. It reflects the needs of the industrial age, of massive hierarchically organised and integrated businesses, of command-and-control, of the big boss. It’s the sub-text to what we see in Alan Sugar’s The Apprentice. But it has less and less relevance to the world of work today and certainly none to the world of community business. Indeed, it has been predicted that 75% of the USA’s S&P top 500 companies will have gone, merged, or contracted by 2027[1] and there’s no reason to expect anything different with the FTSE 500. We’re in a place where neither age nor size nor reputation nor even current sales guarantee that a company will be around tomorrow. We’re seeing a new industrial revolution based on technology and networks which arguably represents “a new mode of production emerging in the middle of the most advanced economies in the world.”[2]  And with this disruption comes new solutions and a new leadership based on collaboration, staff on demand, community and crowd, algorithms, leveraged assets, engagement and what’s been called a Massive Transformative Purpose (MTP)[3].

In his own inimitable fashion, journalist Paul Mason savages the media’s existing lionisation of pinstriped hubris: “If I could get my hands on [Alan Sugar’s] apprentices, I would first teach them to write code. Next, to attend a hacker convention, where their suits and abrasive manner would be ridiculed until both were abandoned. Next, to a hedge fund, where they would be asked to design an algorithm for arbitraging various commodities markets. Next, to a customer-centred business or charity, where they would learn that looking and sounding like a prat is exactly the opposite of what drives market share.”[4] It’s a different world to that of community business but it’s also a world that we need to understand and learn from – both the good and the bad.

Anyway, you may have been wondering about the title of this blog. ‘Where’s the wheelbarrow?’ What’s that got to do with leadership? Today, many of us are ‘swimming in the same river’ – trying to cultivate collective leadership in diverse settings around the world, even while our larger cultural contexts remain firmly anchored to the myth of the heroic leader. In addressing this challenge, we need to acknowledge that ‘leadership’ is a verb and not a noun. That’s a really important point. Leadership is an act of doing something and not a ‘thing’. You can’t put it in a wheelbarrow! That, for me, is the starting position in understanding leadership – it’s about taking action, it’s about doing something, it’s about changing the world in some way. And leadership is also an act of humility – an act of service to others.

In my next blog, I’ll be looking further into what’s been called adaptive and systems leadership and the core capabilities that can perhaps best address the challenges and opportunities of the coming century.

[4] Paul Mason, The Apprentice should challenge candidates to develop a new Facebook – not flog fish fingers, The Guardian, Sunday 11 October 2015