Everyone a banker? Welcome to the new co-operative banking movement

What is the key to success in banking? Fintech companies offer shiny new apps to delight customers, traditional banks rely on sheer scale, financial strength and depth of experience, and others argue that banks of the future will be data companies driven by banker robots. These are important factors, but completely miss the true essence of banking – trust.

The importance of trust in markets

Some markets work better than others.

For an example of a market that works well, I have a wide choice of places to get my hair cut. It is immediately obvious whether I’ve had good service, and my judgement is the equal of the hairdresser (with the possible exception of a few wrong turns in the late 1980s).

Where markets often fall down is where consumers cannot really judge the merits of what we are buying, perhaps because the product is complicated and requires sophisticated knowledge that only the seller is privy to.

Sometimes the seller can exploit known behavioural quirks to subvert our ‘rational choice’ with confusing bundles of features or attractive teasers that lure us with temporarily good deals only to leave us stranded in poor value products we just can’t be bothered to change.

In other cases, the nature of the product means we could never really know whether or not it was fairly priced – for example insurance that you never have cause to claim against.

Banking is a business built on trust, and on this score the industry is still falling short

Certainly trust has improved since the dark days of the financial crisis, but almost ten years after the collapse of Northern Rock, banks have only managed to climb back to “average” according to a recent survey.

Another global survey, by professional services firm EY, concludes that “trust is essential in banking” and points out that although we are broadly happy with our banks’ ability to carry out basic payments and savings functions, we are much more suspicious of whether they will act in our own interests when it comes to selling financial products.

This is hardly surprising given the sheer scale of mis-selling over the past ten years. According to the Financial Conduct Authority, the cumulative compensation payouts to customers who were missold payment protection insurance (PPI) reached £26.9 billion in March 2017 (see chart for monthly figures since 2011). 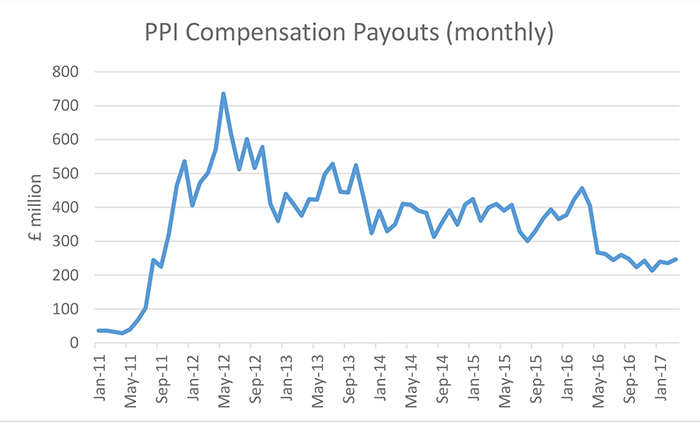 This enormous sum of money is only the half of it (less than half in fact). Credit ratings agency Standard & Poor’s recently totted up all the misconduct fines and charges incurred by the big four UK banks – Barclays, Lloyds, HSBC and RBS - and reached £66 billion since 2011, a figure described by the sober-suited number-crunchers as “staggering”. That’s more than £1000 for every person in the country from new-borns to nonagenarians.

The return of the ‘unbanked’?

One way in which this lack of trust might be affecting people’s lives and the wider economy, is in the stubbornly high number of people without a bank account.

From the Blair-Brown governments onwards, financial inclusion has been a policy priority. I mean, we’ve really, really tried.

Credit unions have been supported with grants and high street banks are now required by law to offer basic bank accounts to everyone. These free accounts are aimed at people lacking a good credit record and they offer debit cards, free use of cash machines and direct debits (vital for getting the best deals on utility bills).

Despite this, the number of UK adults without bank accounts showed a surprise increase to 1.7 million in 2014, according to the latest figures analysed in the Financial Inclusion Annual Monitoring Report 2016 from the University of Birmingham (see chart).

Number of people without bank accounts 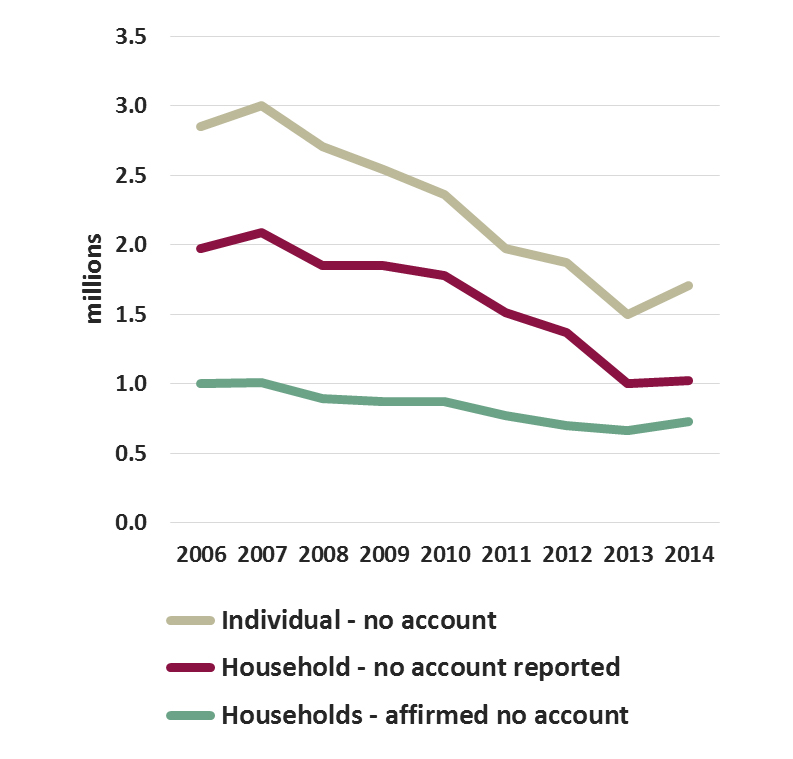 The authors of the report point out that the margin of error in the data means it is too early to draw conclusions about the trend, but a thought-provoking book about the US banking market suggests that something more fundamental is at play.

Lisa Sevron took a break from being a University Professor to work as a teller at a cheque cashing company in the Bronx and a payday lender in Oakland, California. She reveals her experiences in The Unbanking of America: How the New Middle Class Survives.

What did she learn?

She describes the more user-friendly and less intimidating atmosphere of payday loan and cheque cashing shops when compared with the smart bank branches designed to attract more profitable well-heeled customers. As a teller, she would regularly receive tips from customers, almost all of whom were of limited financial means.

The UK market is not the same as the US, but it is similar enough that her findings should worry us.

Her analysis suggests that for a bank to reach these customers, it would have to have a commitment to financial inclusion as part of its mission, and respond to the needs of these customers with suitable financial products and services.

Turning from personal customers to businesses, what impact might the trust deficit have on business lending?

One of the longest running debates in UK banking is the apparent under provision of finance to small and medium sized enterprises (SMEs). From the Macmillan Report of 1931 onwards, UK smaller businesses have been considered to be at a disadvantage to overseas competitors due to a lack of finance.

In the present day, the main UK business lenders insist that all credit-worthy demand for loans is being fulfilled. Small business representatives, on the other hand, still insist that many of their members are unable to access the finance they need for investment.

Both positions are accurate.

One reason for the discrepancy is scale. A medium sized business can have up to 250 employees and sales of £25 million – a significant economic entity. There are 33,300 such businesses in the UK according to the British Business Bank. These businesses are in general being well served by banks.

But at the other end of the scale we have almost 4.2 million registered businesses with no employees, an increase of 77% between 2000 and 2016. On top of this are almost 1.1 million micro-businesses with up to 9 employees.

The huge difference between both ends of the scale has led the RSA to call for a new category of SEM (Self-employed and Micro) to be analysed separately from SMEs to ensure that the needs of this market are being catered for.

The second reason for the discrepancy is ‘discouraged demand’.

Banks fulfil the demand that they see, but what is invisible to them is the number of small business owners that do not even consider approaching their bank. Their reluctance is not necessarily because they think they will be turned down, but because of a deep distrust of the bank’s integrity in dealing with them fairly.

As with PPI, this is hardly surprising, and once again rational given the dramatic withdrawal of credit facilities to SMEs by banks in the aftermath of the financial crisis leading to closures and shrinking of fundamentally profitable businesses.

On top of this we have a string of cases of egregious abuse of small businesses by rogue bankers culminating in the recent successful prosecution of bankers at the HBOS Reading branch for systematic fraud.

The scale of mis-selling is even greater than this, and the All-Party Parliamentary Group on Fair Business Banking was set up earlier this year to pursue justice for the many business people whose lives have been ruined by callous and corrupt behaviour of bankers in whom they had placed their trust.

What if we ran it ourselves?

Which brings me back to the surveys on trust.

The bank that comes top for consumer trust is Nationwide, by a high margin, and for the second year in a row. What is their secret? According to the authors of the report “Nationwide has leveraged its position as a building society owned by its members, and this has paid off in the eyes of the UK public.”

Owned by its members.

Recall the nature of the banking market as one that relies on trust to function well, and this insight should not be a surprise.

What might come as a surprise is that there is no customer-owned bank in the UK and there never has been. The Nationwide is not a bank. As building society, it is legally required to put 75% of its assets into UK residential mortgages and it does not serve businesses.

But hold on, I hear you cry, what about the Co-operative Bank? Isn’t that, well, a co-operative bank?

In fact it was never owned by its customers. It was owned by a retailing group that was owned by its customers. The distinction may seem subtle but I would suggest it tells you everything about why co-operative banks are thriving across Europe while the UK’s solitary Co-op Bank is about to accept a £700m rescue deal which will reduce the Co-op Group’s stake to 1%, leaving the bank almost wholly owned by private US hedge funds.

One might reasonably suggest that to keep the brand “Co-operative” is mis-selling of the highest order.

A new dawn for co-operative banks in the UK

The Co-op Bank could never be owned by its customers because UK banking law prevented it, unlike almost every other industrialised nation.

The Co-operative and Community Benefit Society Act (2014) allowed co-operatives to hold a deposit-taking licence for the first time, clearing the way for full service high-street retail banks to be owned by their customers.

In response, the Community Savings Bank Association was established in 2015 by long-serving RSA Fellow, James Moore. The CSBA’s purpose is to help set up a network of 18 regional co-operative banks across the UK with a mission to serve all people on equal terms and to focus on honest and transparent savings, loans and banking services for SMEs, community groups and households of ordinary means. By providing the back office functions and regulatory frameworks to operate a bank – a ‘bank in a box’ – this model allows smaller regional banks to stay close to their customers while also enjoying the cost efficiency advantages of national scale.

The most innovative part of this is that the banks will be controlled by their customers, one member one vote.

It is this inclusive mission, and focus on supporting regional economies, that led the RSA Inclusive Growth Commission to recommend that regional banks were an important component of inclusive growth.

This is vital to close the social and economic divides that exist across our country.

But it also helps deliver another core RSA objective – Economic Democracy, or specifically the meaningful participation of citizens in the important economic institutions that affect our lives.

As with any social phenomenon, financial inclusion needs to be understood in the context of other social relationships and institutions both to understand fully the its drivers and impacts on other issues, and also to be able to design effective interventions to address it.

We call this approach "think like a system, act like an entrepreneur". So, for example, a systemic analysis might require us to consider other factors such as perverse incentives in the tax and benefits system pushing people into the underground cash economy. Tackling such systemic issues requires collaboration across different institutions, which is another advantage of operating at a regional scale and for which the co-operative ownership and governance structure is well suited.

For its positive contributions to inclusive growth and economic democracy, the RSA is lending its support to the Fellows driving this initiative.

So, as co-operatives fortnight draws to a close, if you like the idea of a new kind of bank, built on the philosophy of mutual trust, and if you are ready to take control of your own bank, register your interest.

The first regional bank has formed in London, the Greater London Mutual, so watch this space for further news of the newest, oldest innovation in banking – banking on each other.