The Government’s response to the Taylor Review promises to boost the employment rights of gig workers and others in atypical forms of employment. They are now entitled to holiday and sick pay – but what about their pensions? For the time being, this question has been left largely unresolved.

In 2017, there were an estimated 1.1m people working in the UK’s gig economy, a figure close to the number of workers in the NHS. These workers are providing a wide range of services, many are highly skilled creatives or professionals using platforms such as Up Work and Freelancer. Despite being the focus of public attention, Uber and Deliveroo account for a relatively small share of employment in the gig economy, with only 16% of gig workers providing driving and/or delivery services.

What these ‘gig workers’ have in common is that they use online platforms to find small jobs, which are sometimes completed on-demand. This definition is narrower than that used by some other commentators, who use the term to include zero hours contracts, agency work and self-employment more broadly – essentially anything outside of a 9 to 5. Yet, we use this more specific definition because gig workers are embroiled in a unique legal controversy over their employment status, which can be easy to lose sight of when they are equated with other types of atypical workers.

Retiring in the gig economy

The gig economy has the potential to be an easy way to supplement pension income in retirement. However, it is yet to widely be used in this way, as only 14% of gig workers are over the age of 55. Today, we may see this more with asset-based platforms such as Airbnb, where the fastest growing demographic group is over 60s.

As an emerging part of the economy, there are no statistics we can refer to about the precise lack of pension coverage here. But we do know the following from previous RSA research.

Auto-enrolment – whereby workers are enrolled by default into a workplace pension scheme and their contributions matched by their employer – has been widely heralded as a success. Now more employees than ever are saving for retirement. Self-employed people however are four times less likely than employees to be contributing to a pension.

Whether it can be extended to gig workers in a straightforward way hinges on their classification. If they are classified as ‘workers’ (or ‘dependent contractors’ as the Taylor review has proposed) then given that they meet the eligibility criteria, they will be auto-enrolled. Self-employed people, however, have no such entitlements because in theory they are their own boss and therefore responsible for their workplace pension. 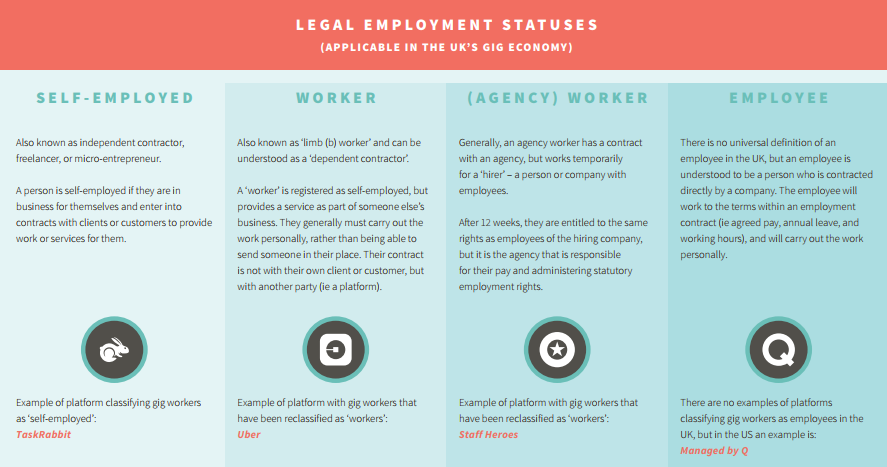 One of the recommendations from the Taylor Review was that control should be of greater importance in determining whether or not someone is a ‘dependent contractor’ – the idea here being that if platforms sanction workers for not accepting a certain mission, then these workers are not genuinely self-employed.

This is still up in the air – the Government’s response was to put this out to a consultation. However, even if all gig workers were reclassified as ‘dependent contractors’ this would offer no silver bullet. A major challenge here is that gig workers are working multiple jobs. And while most will fall below the auto-enrolment threshold of £10,000 for any single job, their total earnings may be above this. In other words, they would still miss out.

A larger number are earning above the lower earnings threshold of £5,876, the point at which employer contributions are calculated and workers are eligible to 'opt-in’. This may actually be more fitting with the ethos of flexibility often espoused in discussions about gig work. And proposals put forward in the Government’s Automatic Enrolment Review to altogether scrap this threshold could mean that gig workers would be eligible for employer contributions on every £1 they earn if they wish.

In theory, their pots could be efficiently managed by a master trust such as NEST who would accept smaller amounts from each employer – these practicalities are yet to be worked out.

However, all this would not entirely solve the problem – as gig workers are a diverse group – and likely to be classified differently according to the platforms they use. For those who are genuinely self-employed, alternative ideas have been put forward. The Taylor Review suggested that they could be auto-enrolled via the self-assessment tax return, with contributions set at 4%.

But this idea is not without its own shortcomings. For the self-employed have no employer contributions and it’s unlikely that the Government would step in here, given previous blunders with national insurance contributions. But the self-assessment also comes at a time when the self-employed are in a ‘scarcity mindset’ and often struggling to find the money to pay their tax bill, let alone save for retirement.

It will be important to put this idea to the test. And while there has yet to be concrete action here, both the Automatic Enrolment Review and the Government’s response to the Taylor Review expressed an appetite to develop and test creative solutions in this area.

Platforms are also showing leadership. Through a partnership with ‘robo-advice’ firm Moneyfarm, Uber are offering their drivers access to discounted pension and ISA products.

The RSA too, is undertaking work in this space. David Pitt-Watson, an RSA Fellow, has laid much of the groundwork for “collective defined contribution”. While these schemes may appear to be designed primarily to rescue the failing defined benefit schemes of big businesses such as Royal Mail. In theory they also offer a solution here. By enabling self-employed people, or gig workers, to pool together on the basis of their platform, industry or trade union, these schemes promise to bring the benefits of collective investment – risk pooling and lower fund management costs – to all workers.

Venturing to Retire is a current research project that is focusing on developing interventions to boost the retirement security of the self-employed, be it changes to tax relief or developing practical innovations that utilise FinTech and behavioural insights. As part of this project we are hosting an RSA Salon in Cambridge on the 28th February. At the event we hope to crowdsources innovative ideas from Fellows and others interested to help us tackle this growing issue.