New data collected from local authorities shows spike in pupils being admitted to schools for excluded pupils in the first term of Year 11, ahead of the January school census that determines if their results will count towards the school’s total.

As part of the RSA’s Pinball Kids project, examining the root causes of rising school exclusions, we requested data from over 300 local authorities under the Freedom of Information Act to understand the link between the pressure on schools to achieve excellent exam results and school exclusions.

The performance of schools are judged by the exam results of their pupils. For GCSE exams in Year 11, the census of which pupils are in which school takes place in January. If a student is at a school for this census in January their exam results will count towards that school’s performance, even if they move schools before the exams.

We were interested to see if there is evidence for the claim that schools are using exclusions to improve their results. Our research found evidence to support this argument: a spike in admissions to Pupil Referral Units in the autumn term of Year 11, the final term before the census deadline.

The rise in student exclusions

On average, 41 pupils are permanently excluded from English state schools every day. The rise in school exclusions has dominated the education headlines over the past year. Government data shows a 15% increase — from 6,685 to 7,720 between 2015/16 and 2016/17 — in the number of young people expelled from their school with no hope of return.

Students eligible for free school meals, those with special educational needs and disabilities and those from certain ethnic minority groups are significantly more likely to be excluded than their peers.

The rise in school exclusions results from a mix of factors. These include funding and resource constraints faced by schools and agencies that support vulnerable children, perverse incentives caused by the accountability regime, and curriculum reform making learning less accessible for some pupils.

Together, these factors create the perfect storm for the country’s most vulnerable children. They leave headteachers facing a headwind of difficult decisions, having to carefully weigh competing rights and interests.

This includes the disruptive student who may require additional support, the rest of the class that deserves to learn, and the teacher who needs to be able to pass on their passion and knowledge free from excessive hindrance or threats to their safety.

Teachers and heads face pressure from parents, each of whom wants the very best for their child. Inevitably, when it comes to managing classroom disruption, the outcomes some parents seek in pursuing the best for their child will be at odds with those of others, although their goal is the same.

Once a school has excluded a student, local authorities have a legal duty to place the child back in full-time education within six days.

Many local authorities operate Pupil Referral Units, specifically designed to accommodate such pupils. We asked these local authorities to provide the number of new students who entered these specialist schools in each school term.

78 local authorities with Pupil Referral Units responded in full (the only anomaly being a few instances where local authorities recorded a value of ‘less than 5’ for some terms, which we counted as 2 to allow easy comparison.)

What the data from our research shows 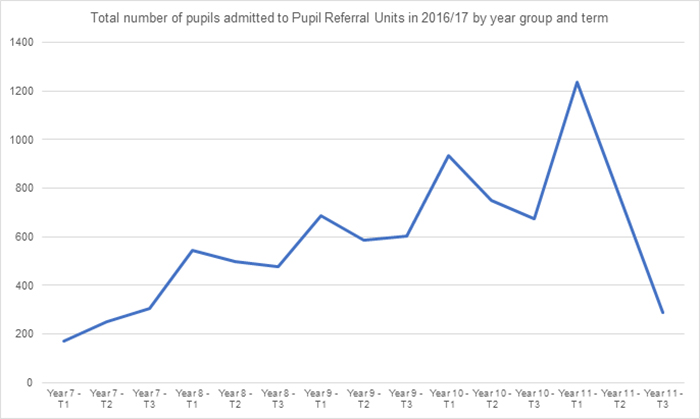 There is a sharp drop-off in admissions in the second and third terms of Year 11, when the rate drops to levels recorded only for Year 7 pupils.

It is important to recognise that some pupils captured in this data will be attending a Pupil Referral Unit part-time, as part of an arrangement with their mainstream school that seeks to ensure they get the support they need in order to avoid a permanent exclusion. In these cases, it is likely that they appear on the registers of both their original school and a Pupil Referral Unit. However, recent analysis from ISOS Partnership suggests that three quarters of pupils in alternative provision are there full-time.

The findings of this RSA project, supported by the Betty Messenger Charitable Foundation, come ahead of the government-led Timpson review into school exclusions, which is expected to be published in the coming months.

Why are schools excluding students to improve exam results?

Interviews with headteachers for the Pinball Kids project have revealed the immense pressure that headteachers experience to achieve good progress and attainment scores.

The number of school leaders who enter the profession to game the system at the expense of the children they teach is vanishingly small. However, under the current system a poor set of exam results may sound the death knell for a headteacher’s career.

Even if it doesn’t, the almost inevitable attrition of pupils to other “better” local schools and loss of associated funding can have devastating effects. Excluding pupils likely to underperform - and distract others from learning in the process - may seem like the lesser of two evils.

We welcome the Department for Education’s recent commitment to refining the calculation of Progress 8 scores to ensure that a small number of very negative scores do not have a disproportionate effect on a school’s overall progress score. However, we would welcome further steps to reduce the pressure of accountability including considering schools’ average performance over multiple years and responding to poor results with support, rather than punitive measures.

Further to this, we are interested in exploring how shared responsibility can be created across local education systems, building on successful approaches taken by some local authorities, and understanding how the very deliberate efforts of some schools to be inclusive can be better recognised and rewarded.

As I explored in my recent RSA journal article, we recognise that beyond the headline figures on formal exclusions, there are many ways in which young people are informally excluded from education.

In our research to date, we have seen exciting work from some schools that are firmly rooted in building fantastic relationships both within the school, between the school and families, and with public services, charities and the wider community. These are themes that the RSA Pinball Kids project will continue to explore.

Read more about this research in The Times (£)

Find out about the RSA Pinball Kids project.