The RSA’s Future Work Centre has today released research that models four ‘futures of work’ by 2035 - and shows how our warring politicians are nowhere near up to speed on what’s going on.

Most of us have heard the stories: the Oxford University study that claims that 35% of jobs will be lost to automation, or the wild-eyed hyper-utopians who claim that a new era of bio-communism will inexorably emerge from the age of machine learning. Such visions, at times, alarm and may even excite. But they are shallow visions; invariably either focussed through the narrow lens of job losses to automation, or else speculating wildly based on precious little evidence, they offer little that is useful to the debate on the human and cultural phenomenon that is the future of work.

The task we at the RSA’s Future Work Centre set ourselves from our outset was to avoid such sensationalism – and in a spirit of sober inquiry, try and give some context to the great futuristic- sounding changes that are having an impact on workers right now. Automation, AI, platforms: what’s the real story here? What does it mean for workers of today and tomorrow?

Most studies on the future of work have focussed on the impact of technology on job losses alone, but there are far broader effects, including the impact of technological shift on surveillance, AI-led recruitment practices and the growth of gig platforms, which would not exist without the powerful algorithms that underpin them.

Commentators tend to misrepresent technological change; to overreach in their predictions. Meanwhile hindsight makes fools out of them. Uncertainties like the health of the global economy, the level of net migration to the UK, and advances in digital technologies like the ‘Internet of Things’ and the rise in the east and west of blockchain: these are all essential but elusive points on a complex and developing future picture.

How do we go about navigating all of this? To bring all this context and all these uncertainties to the table in a credible way we deployed a method known as morphological analysis, informed by expert input and advised on by our project partners Arup. The results of this were modelled by the RSA Future Work Centre’s myrmidons to produce four detailed snapshots of what our labour market could look like in 2035.

These are not predictions but scenarios. What we mean by this is, we are not saying any one of them will come to be. However taken together they capture what we feel is the entire area of plausible future, and each one, we hope, shines a distinct light on an urgent set of challenges and opportunities that our future might hold. Indeed, each one is not just plausible, but to an extent familiar and recognisable in our present; they are points on a horizon rapidly moving our way. I could wax lyrical for ages about the flexibility and power of this type of analysis but that is not for this blog: you can read more about its nuances in the report. For now: let’s focus on our findings and on the four futures of work.

The Four Futures of Work: Scenarios

The Big Tech Economy describes a world where most technologies develop at a rapid pace, from self-driving cars to 3D printing. 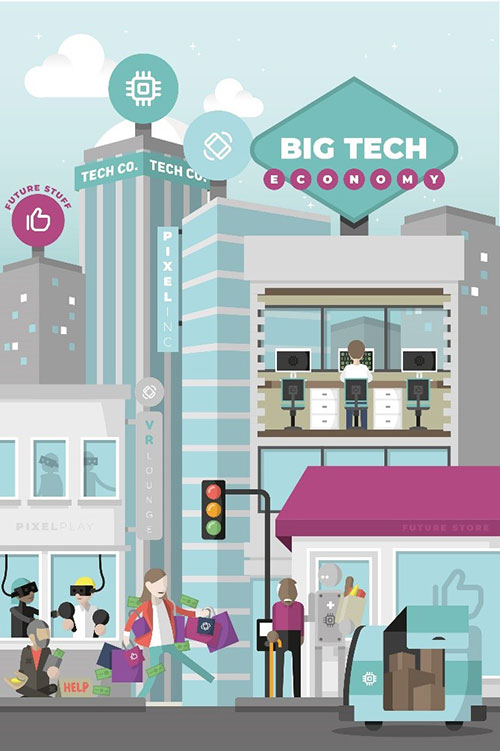 Call it Googleville or picture the Amazon rainforest being actually sponsored by Amazon. A new machine age delivers significant improvements in the quality of products and public services, with the cost of everyday goods including transport and energy plummeting. However, unemployment and economic insecurity ramp upwards, and the spoils of growth are offshored and concentrated in a handful of US and Chinese tech behemoths. The dizzying pace of change leaves workers and unions with little time to respond – and any dissent is quashed by flash PR and ‘CSR’ operations. We never stood a chance.

The Precision Economy portrays a future of hyper-surveillance and algorithmic optimisation. 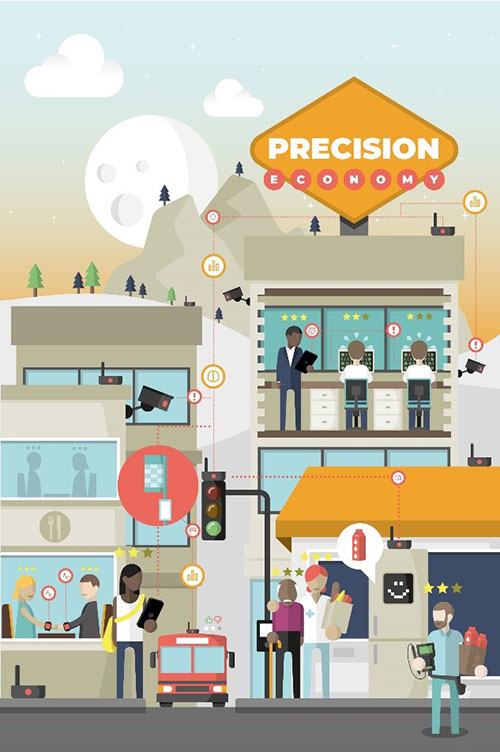 They are watching you! Here technological progress is moderate, but the juggernauts know where the value is. A proliferation of sensors allows firms to create value by capturing and analysing more information on objects, people and the environment. Gig platforms take on more prominence and rating systems become pervasive in the workplace. While some lament these trends as invasive, others believe they have ushered in a more meritocratic society where effort is more generously rewarded. A hyper-connected society also leads to wider positive spill overs, with less waste as fewer resources are left idle. And each time you recycle your personal star rating gets an additional percentile…

The Exodus Economy is characterised by an economic slowdown. 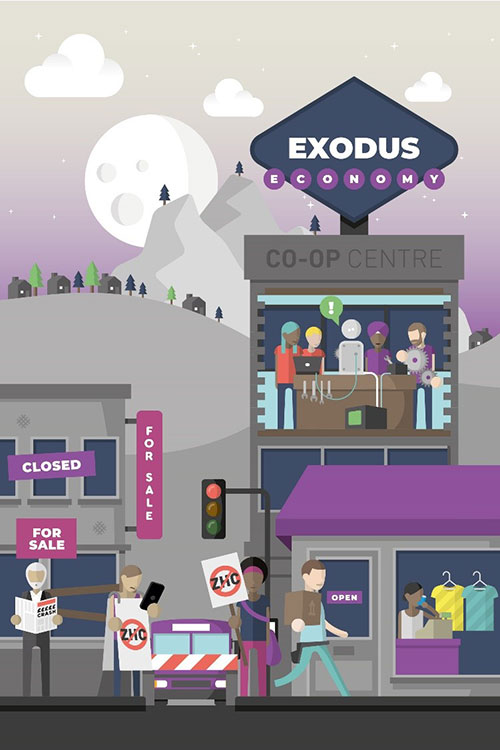 Get ready for the backlash. A crash on the scale of 2008 dries up funding for innovation and keeps the UK in a low-skilled, low-productivity and low-paid rut. Faced with another bout of austerity, a new generation of workers lose faith in the promise of capitalism to improve their lives, and alternative economic models gather interest. Cooperatives and mutuals emerge in large numbers to serve peoples’ core economic needs in food, energy and banking. While some workers struggle on poverty wages, others discover ways to live more self-sufficiently, including by moving away from urban areas, back to the land.

The Empathy Economy envisages a future of responsible stewardship. 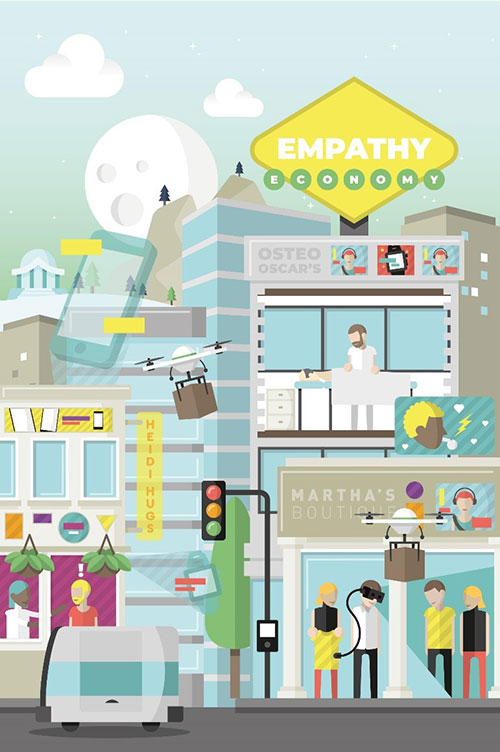 ….And breathe. In this scenario, technology advances at a clip, but so too does public awareness of its dangers. Tech companies self-regulate to stem concerns and work hand in hand with external stakeholders to create new products that work on everyone’s terms. Automation, where it occurs is carefully managed in partnership with workers and unions. Disposable income flows into ‘empathy sectors’ like education, care and entertainment. This trend is broadly welcomed but brings with it a new challenge of emotional labour, where the need to be continuously expressive and available takes its toll.  It’s hard being the shoulder to cry on all of the time.

So there we have it: the four corners, if you will, of the future of work. Each of our scenarios, I think it fair to say, offers at points a vision of positive change but also insecurity and uncertainty in some measure. Communities will be changed; lifestyles altered. The safety nets that we have in place for workers and their families will be tested to breaking point. So where are our politicians on this, they who are tasked with overseeing the laws and instruments that deliver this safety net?

Alas, they are nowhere. They are not at the races. There is a shallow, often shouty and inauthentic debate on automation that kills creative thinking (to say nothing of the dismal distraction of Brexit).

As part of this work we conducted a representative YouGov survey of MPs, commissioned as part of the report. It found that MPs agree new technology will have a huge impact – even as big as Brexit – but are largely ignorant about it.  They are concerned but clueless about what to do next.

Just 15% of MPs think parliamentarians are doing enough to prepare workers for new technologies, while 14% think the same of civil servants.

More MPs disagree than agree that they know enough about new technologies to make the right judgement calls on technology policy (43% to 29%). And this is despite 40% fearing the impact of technology on workers in their own constituency. Lest we forget: 46% saying dealing with tech shifts for workers will be as big a challenge as delivering Brexit.

MPs are clueless also about the effect of radical technologies on women. They disagree that women will feel the most impact, despite emerging evidence to the contrary: three-in-ten (29%) Labour MPs and just 10% of Conservative MPs believe that women will be more affected by automation than men. Recent RSA research warned skilled jobs at all levels are already being ‘lost’, but unlike the loss of manufacturing and industry in the 1980s, women are currently faring worse due to automation and digital changes in banking and retail as well as public sector austerity.

There is no consensus on other dimensions of winners or losers. Labour MPs are more pessimistic about ‘who gains’ than Conservative MPs. Conservatives think the big winners from new tech will be consumers, but Labour MPs and the public are more sceptical: nearly half (45%) think consumers will be the biggest winners from technology, compared to just 12% of Labour, while 36% of Labour MPs think tech firms will gain most, with 20% of Conservatives agreeing, while 43% of Labour MPs think employers will gain the most, with just 15% of Conservatives agreeing.  Our best interpretation of these results is that the RSA Future Work Centre still has a lot of work left to do.

So here’s what we have to do

Beyond getting the basics out there, and enriching the conversation around work our report calls for a comprehensive ‘game plan’ to deal with how new technology is already playing out, including:

Needless to say at the political level, there is no consensus for any of these solutions; how can there be when politicians’ minds are elsewhere? Indeed, I suggest that prior to consensus on solutions, we need a great coming together of the political and practitioner classes with the public. We need to use this rich framework to inform our debate going forward. Forget the Svengalis and shysters and shouty-demagogues with their baseless predictions of future utopia or hell: let’s prepare for the future from this solid ground.

This, in part is our next stage of work. For without this coming together, we will not face up to the reality. The only response that matches in breadth and magnitude the many challenges we face is a new social contract – that is, a new settlement between workers, companies and the state – that undergirds the workers of the future, no matter which future is theirs. For when all is said and done, though these futures may inspire worry or even dread, they are far from fatalistic. This is a tale where the bulk is still to be written. We can get this right. Everything is still left to play for: but the preparation must begin, not at the end of this political cycle, but now.

Find out more about the RSA Future Work Centre

YouGov completed online interviews with a representative sample of 100 MPs.
The survey was completed between 12 and 26 February 2019. All results are based on a sample and are therefore subject to statistical errors normally associated with sample-based information
Results for MPs are weighted by party, gender, electoral cohort, and geography to give a sample that is representative of the House of Commons and based on a 95% confidence level results are correct to +/- 9%.