As the economy has evolved over the last decade, a perfect storm of austerity, automation and e-commerce has created winners and losers, with women in particular bearing the brunt of job losses in back office and high street roles. But the start of a new decade warrants a healthy dose of optimism. What new jobs will emerge? And how can we support workers to transition into the jobs of the future?

The future of work is coders and carers

We analysed Labour Force Survey data to understand what the fastest growing and shrinking jobs were between 2011-19, in terms of their net change in total employment.

It may come as little surprise that programmers and software developers were the fastest growing occupations, with over 160,000 new roles created (a 72 percent increase from 2011). IT directors and business analysts were also in the top 20 fastest growing occupations. But unfortunately, the cliché of ‘tech bros’ is entirely warranted: less than 20 percent of these flashy well-paid jobs were filled by women.

Expect to see more of these hi-tech roles in the 2020s – as the tech giants look set to disrupt traditional industries such as healthcare and finance. 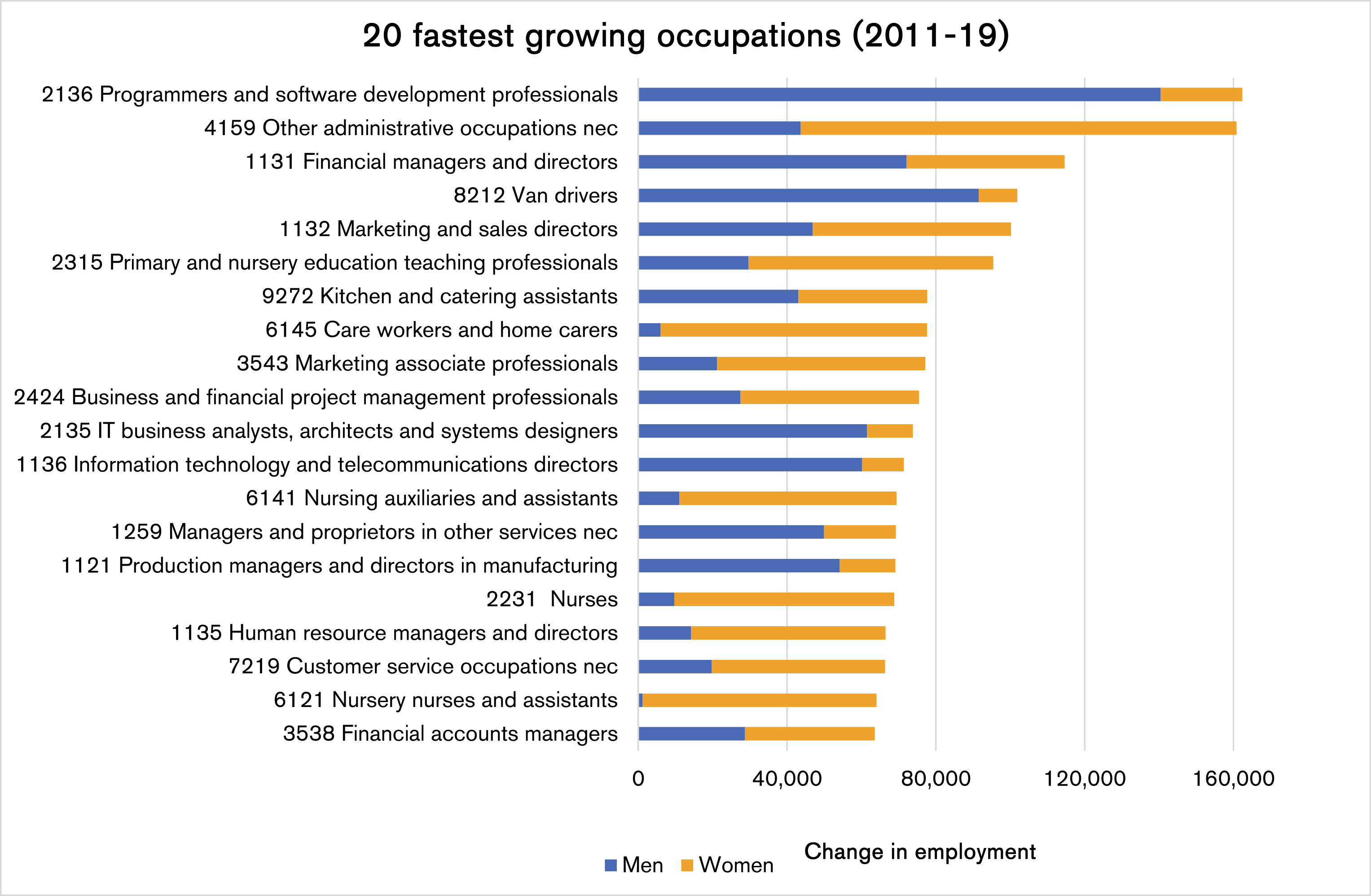 We have also seen a growth in hi-touch jobs. Primary and nursery school teachers, care workers and home carers, nurses and nursing assistants were also in the top 20 fastest growing occupations. These roles are also gendered, with the vast majority being filled by women. The growth in these roles is in keeping with changing demographics, particularly an ageing, ailing population – a trend which is almost certain to continue into the next decade.

The death of the high street

The top 20 occupations that have seen the biggest losses include many traditional high street jobs, such as retail sales assistants, check out cashiers, bank and post office clerks and dry cleaners. 289,000 high street jobs were lost over the last decade, 81 percent of which were held by women. Previous RSA analysis suggests that the death of the high street is also having a disproportionate impact on regions outside of London. Back office roles, such as administrators in government, personal assistants, telephone salespeople and pensions clerks are also in long-term decline. 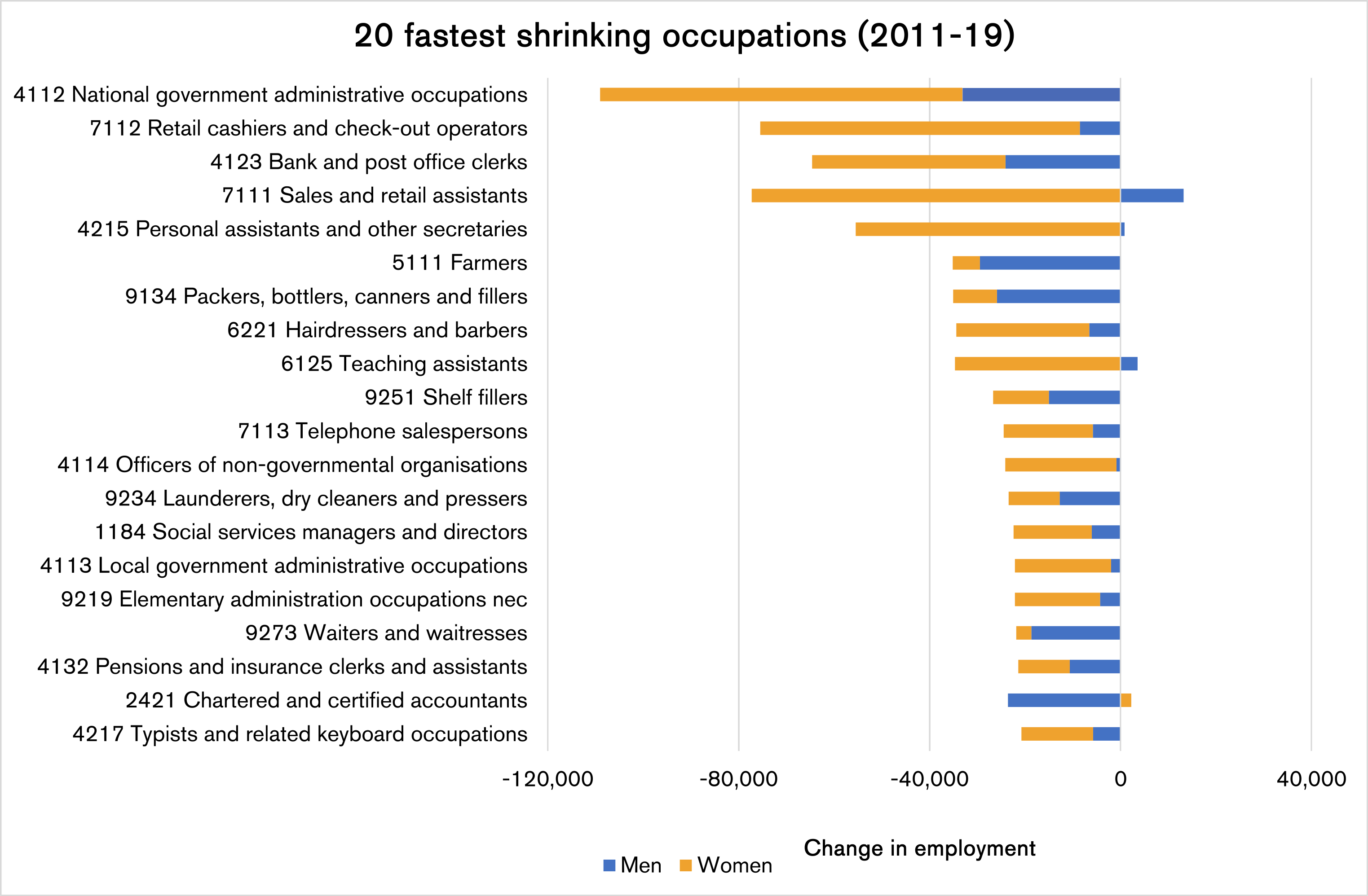 What jobs could these workers be doing in the 2020s?

Jobs of the future

We expect these trends to continue into the next decade. But to predict the jobs of the future, we may need to do more than simply look at the past. For many are yet to widely exist, let alone be classified in official statistics.

In the RSA’s Four Futures of Work report we used a method known as morphological analysis to map out different scenarios for 2035. This involved drawing on expert opinion to identify high-impact, highly uncertain drivers of change, from technological progress to the health of the global economy and future of the trade union movement. We then explored the different ways these ‘critical uncertainties’ could play out over time and interact with each other.

While these scenarios for the future of work are not exhaustive predictions, they present a wide range of plausible outcomes in a way that is vivid and easy to grasp. Each offers a glimpse of the different kinds of jobs we expect to see in the next decade.

How to help workers transition

Women have borne the brunt of jobs lost to automation and austerity in the last decade, as well as missing out on the best-paid new jobs. At the same time, a recent OECD study has warned that low-skilled workers at risk of automation are three times less likely to participate in training than those in jobs more resilient to technological change. These workers face a double whammy. We need to do more to help them transition into the jobs of the future otherwise they will be ‘left behind’.

There is no silver bullet here, but the UK should take note from best practice from around the world.

Both France and Singapore are piloting personal learning accounts, which give all workers annual training credits that they can spend on accredited courses. Personal learning accounts are a ‘portable benefit’, independent from employment arrangements – meaning the credits accrued are retained by workers even if they move jobs or become unemployed.

New jobs will emerge in the 2020s – from coding to caring, and new roles rooted in sustainability. But for workers to transition we will need a robust approach to upskilling and reskilling. Lifelong learning is one key pillar of the new social contract that we must build backing for. In the next few months, the RSA will be publishing a report outlining a blueprint for this social contract: a set of interlocking rights and responsibilities, for state and society, that can drive good work and economic security, now and in the future.