Our new research uncovers a worrying level of financial precarity among young people and raises cause for concern when it comes to their current and future economic security.

In a new report, we share the findings of a survey of almost 1,200 young people aged 16-24 years old in the United Kingdom. Reflections from the project’s Young Advisors, a group of 16-25-year-olds working with the RSA to explore this important topic, have helped shape our analysis and are included throughout the report.

This alone is a concerning finding. But beneath this statistic we find three worrying trends in young people’s economic security today:

1. Young people are paying a heavy price for growing up, with their financial situation changing significantly as they move into adulthood.

Young people become more likely to face financial precarity as they get older. The proportion of financially precarious young people rises from 38 percent of 16-18-year-olds, to 57 percent of 22-24-year-olds.

Percentage of young people who are financially precarious, by age band

At the same time, young people also become more likely to take on debt, less likely to have savings, and less likely to be able to access support from family as they get older.
While taking on greater financial responsibility – and precarity – may be seen as an inevitable part of growing up, our research highlights the heavy price many young people must pay for independence, sacrificing their economic security in order to take the necessary next steps into adulthood.

Young people face a vast amount of challenges, especially as we become more independent. [It is] an issue that is often overlooked in government discussion [who] carry the dominant expectation that people within this age group can solely depend on their parents when it is not always the case.

2. Neither work nor welfare is giving young people the economic security they need.

In addition, only a third (32 percent) of young people in work feel that it provides them with enough money to maintain a decent standard of living and around one in five (19 percent), sometimes have trouble meeting their basic living costs because their income varies each month.

Our report highlights how current policy decisions – such as lower minimum wage guarantees for under 23-year-olds and lower benefit allowances for under 25-year-olds – limit young people’s access to a financial safety net at the time when many are becoming more vulnerable to financial precarity.

The resources and mechanisms designed to create security are becoming increasingly inaccessible to young people.

3. Economic insecurity is risking young people’s confidence in their own future health and financial wellbeing, and the future of their generation.

Between half and two thirds of young people who are financially precarious report being worried about their financial, housing and employment situations, their physical and mental health, and their future.

Percentage of young people who are worried about aspects of their lives, by financial situation 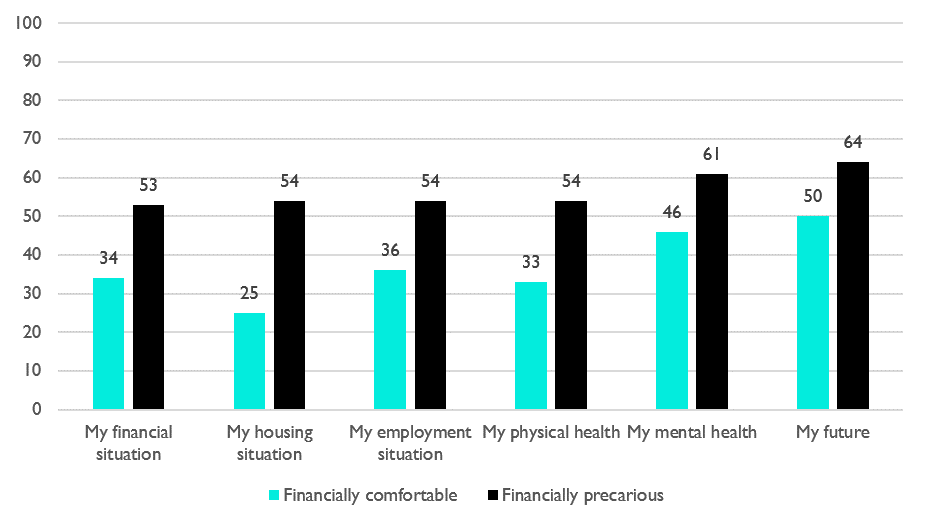 While financially precarious young people are more likely to be worried about these areas, concern is alarmingly high among those who are financially comfortable too. 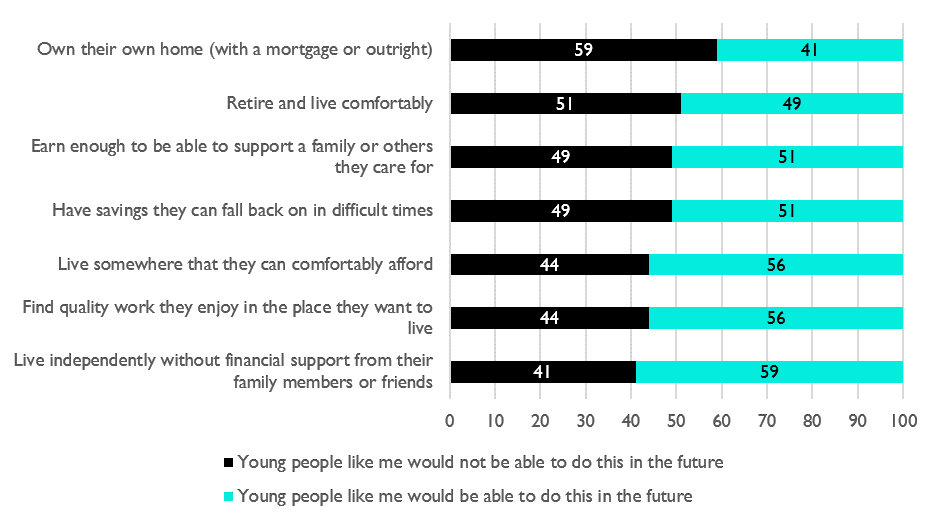 Our research surfaces a number of ways that young people’s current financial situations affect how they think about their lives, both now and in the future, as well as an overall lack of confidence about future economic security.

Difficulty finding well-paid work along with soaring house prices also means our generation will struggle to purchase a property in the future. For many of us, we aren't able to invest financially in our futures in the way we would like to.

It is clear from our research that the current system does not work for all young people, with many forced to trade financial stability for independence, unable to access adequate safety nets or avoid precarity even when working. It is also apparent that economic insecurity is risking young people’s confidence in their own – and their generation’s – future.

Better support for young people’s financial situation in the present, short- and long-term future – and understanding the complex relationship between these – is therefore crucial.

We must view [the findings of this survey] as a need to reset in the way we think about young people's economic security. Young people's economic security is more than just whether they have enough money for basic subsistence. We need to explore the psychological effects of economic insecurity and whether the country provides enough support to ensure that [young people’s] emotional needs as well as their financial needs are met.

We call for a different approach to policymaking that protects and promotes young people’s economic security through:

1. Policies that recognise and respond to the changing needs of young people as they move into adulthood.

Policy must go beyond thinking about young people at static points in time, and instead respond to their changing needs as they prepare for, and take steps into, adulthood. It must also address disparities in economic security between young people and respond to the needs of those who are more vulnerable to it at different moments.

2. Pro-young people policies that support economic security and don’t discriminate against young people compared to those older than them.

Policy must provide effective safety nets that actively support young people’s economic security, rather than overlooking or disadvantaging them based on age as many current policies do.

3. Long-term policies that protect and promote young people’s economic security in the future.

Policy must address young people’s concerns about the future, taking a long-term approach to ensure economic security for today’s young people, as well as for future generations.

These are ideas that we will continue to explore with young people, policymakers and practitioners at local and national levels through the our Young people’s future health and economic security project.

See our full report for more detailed discussion of our survey findings and more reflections from the project’s Young Advisors.

If you would like to know about the project, please get in touch.

This report shares the findings of a survey looking at the economic security of young people aged 16-24 years old in the United Kingdom, uncovering a worrying level of economic insecurity among young people today.