A defence of criminal damage

David Lambert FRSA is one of six people who this April were found not guilty of criminal damage as part of action taken by Extinction Rebellion’s activity. He explains what happened.

On 12 April 2021 my co-defendants and I appeared at Southwark Crown Court on charges of criminal damage, relating to an action nearly two years before at the Shell building near Waterloo, undertaken as part of Extinction Rebellion’s (XR) London protests in April 2019.  We had broken windows at the entrance, hung a banner from the canopy above, poured fake oil and sprayed messages about Shell on the walls. 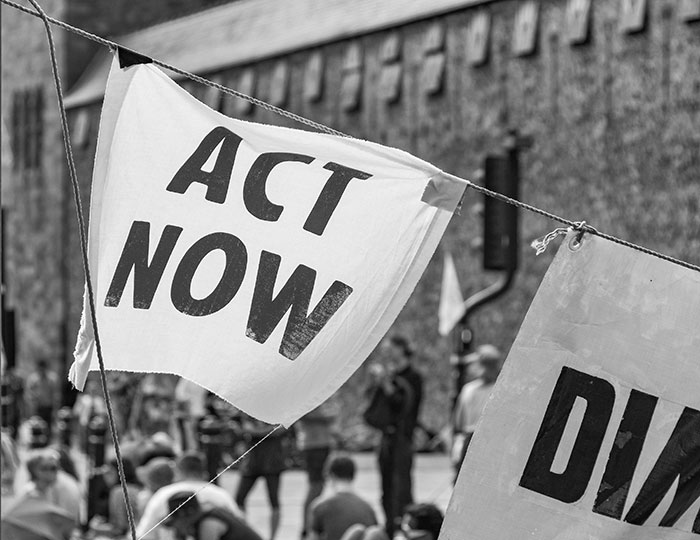 The action was designed not only to draw attention to Shell’s crimes, but also to get us in front of a jury. The reason was that at magistrates’ level, the law is simply administered by rote; there is little scope for magistrates to manoeuvre or take account of circumstances. A jury however is able to deliver a verdict, which considers other factors than just the law – a perverse verdict – if it feels strongly enough. In this case, that is exactly what happened and we were found not guilty on the 23 April.

Raj Chada of HJA, who co-authored a piece for the RSA Journal, prepared a skeleton defence for us, and the judge’s ruling on it indicated that there was no legal defence against the charge of criminal damage.  However, on the defence of necessity – that is, the defendant had had no choice in the face of the threat of death or serious injury, which has been used and rejected in many climate activism trials – Judge Perrins said he would rule on its admissibility after the defence evidence rather than before. That proved a crucial concession.

It didn’t look like a concession at the time. Legal advice from HJA was that it looked as though the judge was not going to allow the jury to consider the justifications we wanted to advance.  That would mean that a barrister’s ability to put forward our arguments would be very restricted, and so we might be better off dispensing with their services. We took that advice and spent several weeks preparing our case, with HJA’s continuing advice, freely and generously given, and also of other judicial friends.

A key insight for outsiders like us was that, in English common law, the judge is no more than a facilitator for the jury, merely their adviser on the law and on the trial process. The judge can tell the jury that the defendants have no defence in law, but he cannot then direct them to deliver a guilty verdict. While they must have due regard to the law, the jurors swear to try the defendants ‘according to the evidence’. For a layperson this is a fascinating distinction.

So, putting the judge to one side, at the heart of the judicial system with its baggage of daunting formalities, is a very simple process, that of one person explaining their actions to 12 other people. In our case, dispensing with barristers enabled that process to become much more effective. We were helped to simplify the process further when our judicial friends explained that evidence itself is also a simple matter: who you are, what you did and why you did it.

We do not know why the judge allowed us to present our evidence when he had indicated that he would be ‘very likely’ to rule it out as a defence once completed. The reason he gave in his ruling was that because he was ruling on three different XR protest cases, with 20 different defendants, he could not be certain that some detail or nuance in the evidence might not provide an admissible defence. The Crown Prosecution Service (CPS) objected right at the start of the trial but the judge stood by his ruling, and this gave us the opportunity to explain ourselves to the jury at some length.

We had to reassure the court that we were not there to pull a stunt or to lecture the jury about the climate, and we understood that it was not Shell who were on trial here.  On that basis we were allowed to explain our actions in terms of what we believed, and give evidence that our belief was reasonable.  Provided we stuck to those ‘ subjective’ beliefs, and did not stray into the ‘objective’ reality of the emergency, the judge let us continue. In effect, this was a good deal of leeway, little of which we would have had if we had retained legal representation.

One after the other, in our different ways, we explained ourselves to the jury and described how we had come to realise the seriousness of the climate emergency. We referred to the authoritative reports and articles we had read, the reasonable mainstream voices we had heard, the photographs of the devastation in the Niger delta and the famous hockey stick graph on carbon emissions, which we had seen. As we shared our evidence, I guess the jury’s focus moved from our action to the climate catastrophe.

The legal basis for rejecting the defence of necessity was spelt out by the judge in his Ruling with reference to the House of Lords judgement on R v Jones 2006 and the High Court ruling on R v Thacker 2021. He quoted Lord Hoffman from the Jones judgement saying: “The defendants’ acts must be considered in the context of a functioning state…in which even the most passionately held beliefs can be expressed in a way which does not involved committing a criminal offence”.

We all found this phrase, ‘a functioning state,’ provocative, but we were not allowed to argue with the basic premise, because that was a matter of law insofar as it was established in judgements from higher courts.  But we were allowed to argue that in this area of the climate emergency, it was our honest belief that we did not live in a functioning state at all. We were allowed to provide evidence to support that belief: evidence of successive governments’ failures to act; evidence of the success of big oil in lobbying against regulation; and evidence of the deaths of thousands of UK citizens from the effects of air pollution as a result.

The CPS barristers may have been slightly wrong-footed by our having no representation at all; their weapons of legal argument could not be deployed as usual.  They couldn’t risk looking as though they were bullying us and, in not disputing the prosecution evidence – in effect admitting our guilt before we even started – we left them without much to do other than repeat that what we had done amounted to the crime, that there was no defence and therefore the case was simple. In convincing the jury it wasn’t simple at all, or at least that there was a reasonable doubt that it wasn’t simple at all, we sidestepped the prosecution case.

In our closing speeches we each expressed our gratitude to the jury, and in effect shared our uncertainty about what to do in the face of the evidence of climate collapse. We did not hector them, demand anything, or tell them we knew best. They had listened to our evidence and we asked them: What should we do? What should we all do?

The not-guilty verdict feels like an important moment – for us, of course – but also for the 12 members of the jury.  We do not know what went on in their deliberations but it seems reasonable to assume that part of their discussions would have been along the lines of, OMG, I had no idea things were so bad. If people are given the facts they will respond in a far bolder way than might be anticipated. In that sense, the decision could be seen as an indication of the potential of citizens’ assemblies to address the climate emergency.

We cannot be sure, but maybe the verdict also signalled the support of ordinary people for the right to protest. In our evidence, we emphasised respect, non-violence and care even as we defended action, which, on the face of it, was illegal. This does not mean that any members of the jury would remotely wish to commit a similar act but maybe it meant they felt we might have a point when we said the law as it currently stands is failing to protect us. It would be nice to think that the verdict might have some implications for the Home Secretary’s Police, Crime, Sentencing and Courts bill, which is based on the false narrative that there is widespread support for legislation to outlaw non-violent protests.

David Lambert is director of the Parks Agency, a consultancy specialising in the conservation and management of public parks and green spaces. Since 2018, he has been closely involved with Extinction Rebellion and campaigning for action on the climate and ecological emergency.