As we reach the beginning of year three of the Covid-19 pandemic, we have swapped the fantasy of returning to the lives we once knew for a more practical dream: to contain the virus enough so that people can return to their pre-pandemic activities. This new goal is reachable and the key – vaccines – was already available less than a year after the pandemic started. Yet we are falling short on this new game plan, not due to a lack of scientific know-how, but because not all countries are playing fair.

In year one of this pandemic, it hardly seemed imaginable that vaccines would be ready within a few months, but scientists leveraged decades’ worth of research to make this possible. By December 2020, the first jabs were going into people’s arms. The problem was that not all arms were treated equally.

Countries like the US and the UK swooped in early and poured resources and money into making vaccines, then claimed the front spots in the queue. Meanwhile, other countries without similar levels of disposable income were left at the back of the line. This has in large part left poorer countries, particularly those on the African continent, at a disadvantage.

What has not changed throughout the pandemic is that no one is safe until everyone is safe. Vaccine inequity remains our greatest challenge and until it is addressed there is no chance of finding that new normal. Like it or not, we are all connected.

Where are the world’s Covid-19 vaccines?

Around 10bn Covid-19 vaccines had been distributed globally by January 2022, according to vaccine tracker Our World in Data. Yet, according to a December 2021 report from the African regional office of the World Health Organization (WHO), fewer than one in 10 people in lower-income countries had received a shot, only 3% of global doses had gone to African countries and immunisation rates in richer countries were almost eight times higher than those on the continent.

The vaccine landscape has changed drastically over the past year. While there was once a shortage of available doses overall, that is no longer the case. Manufacturers have proved they can keep up with high demand. The COVID Global Accountability Platform reported that around 11bn vaccines were made by the end of 2021. That was enough doses to immunise 40% of the global population, a goal set out by WHO. The secondary WHO target of reaching 70% of the world’s population could also be reached by mid-2022 based solely on production numbers, which are expected to double over the course of the year.

While vaccines are not able to (nor intended to) provide 100% immunity, several candidates have proved to provide strong protection against severe Covid-19. The different vaccines vary in efficacy when it comes to the level of protection provided. In December 2020 Pfizer-BioNTech was one of the first to publish data showing that two doses of its vaccine offered 95% protection, meaning those that received the vaccine were 95% less likely to be infected by the virus than those who did not.

Vaccine strategies around the world seek to curb the deadly toll of this virus and help ease the pressure on healthcare facilities. Doses are (ideally) diverted to the most vulnerable first, such as the elderly or people with weakened immune systems, and then to the broader population. But, when some countries stockpile jabs, it becomes impossible to ensure sufficient protection for all those who need it around the world. This problem has only grown starker as new forms of the virus pop up.

In the roll-out rumble playing out across the world, it is no longer enough for a country to immunise only its own population. Instead, it has become a competition for who can get the most shots into the most individuals in the fight for ultimate protection. While African countries lag behind in achieving at least one shot per person, countries like Israel are already offering some citizens a fourth dose. A sense of self-preservation has become more prevalent over the past year due to the rise of variants.

All viruses undergo changes over time called mutations. Most are insignificant, but occasionally they drastically alter the bug’s behaviour. After nearly a year of minor changes and slight alterations, suddenly there were structural shifts to the virus that put researchers on alert. On 18 December 2020, WHO dubbed the first two variants of concern Alpha and Beta. They were identified in the UK and South Africa, respectively. As the names suggest, these versions of the virus had certain advantages that let them outcompete others. In the case of Alpha, it was able to spread very efficiently from person to person, whereas Beta arrived with excellent outmanoeuvring skills that allowed it to evade the body’s natural defences. These were by no means the last variants to emerge.

Less than one year after their discovery, a new variant appeared on the scene: Omicron. This is the fifth variant of concern to be identified. It is also one of the most concerning because it is the most mutated form of the virus that has been seen to date, with over 50 changes to its structure, many of which occur at a key point where the virus attaches to human cells. What that means is this variant shares many advantages of its predecessors – such as the ability to spread quickly and evade some levels of natural protection – with much more left to learn about the consequences to humans of the other changes.

To date, Omicron is perhaps the most worrisome of the variants simply because of the level of unknowns. What we do know is that, once it enters a country, it can very quickly dominate infections and displace other variants in a setting. It is also able to dodge some of the defences of the immune system. This makes people more vulnerable to reinfection and reduces, at least in part, how much protection a vaccine can offer. Why? Because vaccines were designed to target specific aspects of the original virus. For example, one of the easiest structures for the vaccine to attack is the spike protein, which sits on the surface of the germ and is the point at which it attaches to human cells and infects someone. Changes to this area, as seen in variants of concern, means that vaccines are not able to fight off the virus as efficiently.

For instance, the Pfizer-BioNTech jab showed a drop to 70% protection against Covid-19 caused by the Omicron variant, according to data published in the New England Journal of Medicine in December 2021. Two doses of the vaccine, however, still proved to be 93% effective against hospitalisation in Omicron cases. The company’s own research found that receiving a third booster shot would help bolster the body’s immune response and restore protection against Omicron infection 25-fold.

The continued existence of variants, especially those that have the potential to reduce how well vaccines work, has driven demand for yet more doses as countries begin to pursue booster shots, not just for elderly people or those most vulnerable to severe disease, but for entire adult populations.

The case for equitable vaccine distribution and uptake

Hoarding shots to use as boosters for an already largely vaccinated population is not the solution because, put simply, a virus that spreads is a virus that mutates. The more Covid-19 remains uncontrolled in parts of the world, the more likely that variants will continue to develop. “This virus does not respect borders,” said WHO Director-General Tedros Adhanom Ghebreyesus in February 2020, a statement which has only become clearer as variants spread across countries. As long as countries choose to serve their own (short-term) interests and leave others behind, the pandemic will not end. As long as people remain vulnerable and the virus is given room to run wild in any part of the globe, it will continue to spread elsewhere. 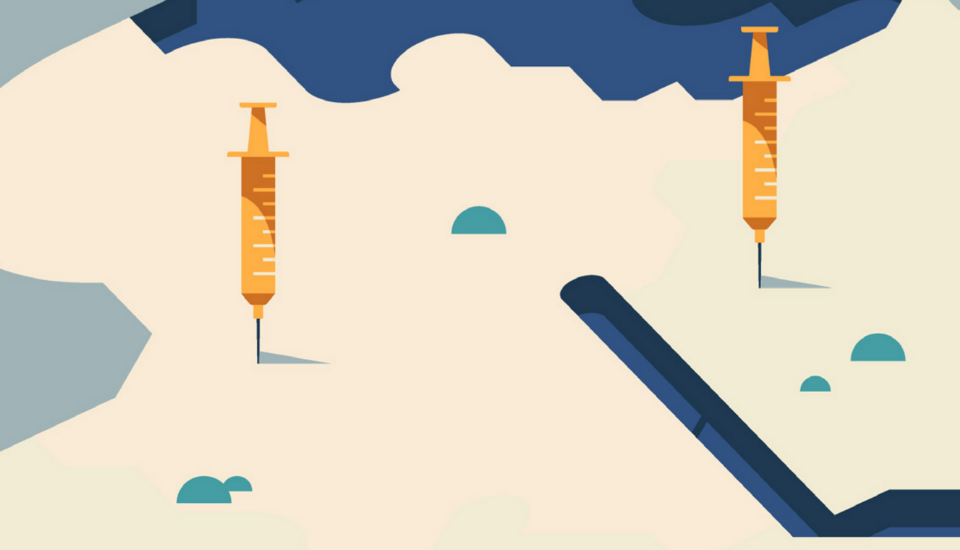 As long as countries choose to serve their own (short-term) interests and leave others behind, the pandemic will not end.

Rectifying this requires looking beyond our own populations at the bigger pandemic picture. For countries with excess doses, this means sharing supplies rather than opting for triple or quadruple protection of their own populations. Countries with sufficient vaccines must also make a concerted effort to address vaccine hesitancy and increase uptake of the jabs. Education is a critical component of this effort.

Combating misinformation and getting people on board with immunisation means treating holdouts with empathy and engaging with communities beforehand to find out what information they need to be comfortable receiving the vaccine.

In lower-income countries, the struggle has not been with an unwillingness to take up the vaccine, but its unavailability. That lower-income countries would be left behind was a worry even before working vaccines became available. The proposed solution was an initiative called COVAX, a partnership between WHO, GAVI, the Vaccine Alliance, and the Coalition for Epidemic Preparedness Innovations. COVAX aimed to provide 2bn doses to 190 countries by the end of 2021, with 92 low-income countries being provided with shots at no cost. The pricing structure was set up so that richer countries would buy in at a higher price to subsidise the lower cost for less wealthy countries.

Unfortunately, this goal was not met. COVAX struggled to get access to doses early on because richer countries had engaged in their own bilateral deals with manufacturers and had done so in excess. Since manufacturing companies had to honour their agreements with these countries first, COVAX deliveries were delayed. Ultimately, COVAX only hit half of its original goal, delivering 1bn doses by 16 January 2022. WHO highlighted this hoarding and noted that secrecy from pharmaceutical companies and a refusal to share the knowledge surrounding vaccine development hindered access to supply.

But there is hope: individual governments and countries have the power to change this. Many countries have already made commitments to donate their surplus doses to COVAX in hopes of rectifying the inequity they helped create. In September 2021, the US pledged to donate approximately 1.2bn doses to COVAX; it delivered 400mn of these in January 2022. Canada, the UK and Germany have agreed to donate millions of doses. If the remaining donations do arrive in 2022 as promised, this should help alleviate the supply constraints COVAX has faced.

There are more than enough vaccines, but fixing the inequity issues of the past year means more buy-in from everyone. Richer countries need to relinquish their nationalistic tendencies and move towards sharing shots. Globally, everyone needs to work towards ensuring that uptake does not wane over time. Pandemics impact everyone and require a truly collaborative effort.

Aisha Abdool Karim is a senior health reporter at the Bhekisisa Centre for Health Journalism in South Africa.

This article first appeared in the RSA Journal Issue 1 2022.