In the global race to reinvent the state, which political values will triumph – the liberal values of democracy and freedom, or the authoritarian values of command and control?

What is the state actually for?

In most of the states of the West, disillusion with government has become endemic. Gridlock in America; anger in much of Europe; cynicism in Britain; decreasing legitimacy everywhere. Most of us are resigned to the fact that nothing is ever going to change.

But, John Micklethwait and Adrian Wooldridge argue, this is a seriously limited view of things.

In response to earlier crises in government, there have been three great revolutions, which have brought about in turn the nation-state, the liberal state and the welfare state. In each, Europe and America have set the example. We are now, they contend, in the midst of a fourth revolution in the history of the nation-state, but this time the Western way is in danger of being left behind.

Which political values will triumph in the twenty-first century? The liberal values of democracy and freedom or the authoritarian values of command and control? 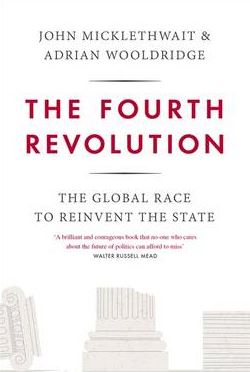