Europe, Austerity and the Threat to Global Stability

The economic crisis in Europe is not over, it's getting worse. Yanis Varoufakis, former finance minister of Greece, argues that the origins of the collapse go far deeper than our leaders are prepared to admit – and that we have done nothing so far to fix them.

In 2015, Yanis Varoufakis became the world’s most prominent opponent of austerity when, as finance minister of Greece, he refused to accept the terms of the loan agreement dictated to his bankrupt country by the eurozone’s leaders. Since resigning his post he has become the figurehead of an international grassroots movement, joining together to put the ‘demos’ back into European democracy.

At the RSA, in conversation with Matthew Taylor, Yanis Varoufakis will explore the origins of the crisis of 2008, which wiped out half a dozen national economies and brought several more to the brink of collapse. Since then, he argues, by pursuing plans based on more debt and harsh austerity rather than reform, European leaders have ensured that the weakest citizens of the weakest nations pay the price for the bankers’ mistakes, while doing nothing to prevent the next collapse. Instead, the principle of the greatest austerity for those suffering the greatest recessions has led to a resurgence of racist extremism. And once more, Europe is a potent threat to global stability.

How did we get into this mess and can we fix it? As the UK draws closer to its historic referendum decision, can we revive the original ideals of the European project in which so many have lost faith? Do we have to choose between surrendering to the EU or leaving it – or is there a third way that puts the citizens back in control?

Join in the Conversation #RSAeurope 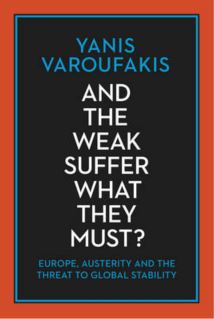 And the Weak Suffer What They Must?: Europe, Austerity and the Threat to Global Stability