What do the abolition of slavery, democracy and votes for women have in common? They were once viewed as unachievable Utopian fantasies – only to be eventually accepted as basic common sense.

Exciting new thinker Rutger Bregman visits the RSA to argue that the real crisis of our times is not that we don’t have it good, or even that we might be worse off in the near future - it’s that we don’t have the imagination to come up with anything better.

A huge bestseller in the original Dutch, and garnering plaudits from a swathe of eminent thinkers, Rutger’s sensational book Utopia for Realists overturns existing notions about how to run society with radical yet wholly practical ideas for a happier, healthier, wealthier world. From the Universal Basic Income movement - inches away from implementation by President Richard Nixon, and currently spearheaded by the RSA - to a 15-hour working week - the only way to tackle the ‘second machine age’- Bregman piles up the evidence for win-win solutions to the growing problems of inequality and unhappiness to be found in societies across the globe.

Having already sparked a movement across the Netherlands, where 20 municipalities are now putting basic income into action, Rutger’s work inspires a firm belief that the most vital ingredient for political change is the conviction that there truly is a better way.

In association with 92Y’s Festival of Genius Week. A global festival celebrating the power of genius, with a special focus this year on creative ideas and thinking for social good. From New York to Nairobi, Jerusalem to Guatemala City, communities around the world come together for one week to explore, debate and celebrate genius ideas and innovations that have the potential to improve our lives by addressing some of the world’s biggest challenges. - See more.

Join in the Conversation #RSAUtopia 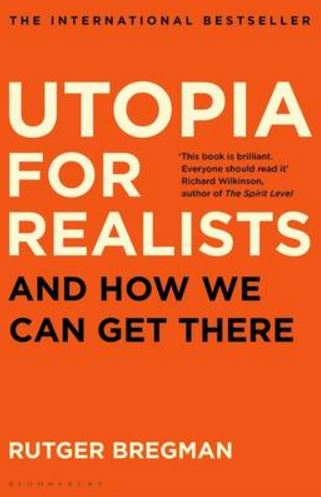 Utopia for Realists: And How We Can Get There