How to Seize the Political Day

Is the age of representative democracy crumbling before our eyes?

With the failure of successive governments to tackle challenges ranging from climate change and terrorism, to growing inequality and far-right extremism, we have seen a sharp decline in trust and confidence in politics. The result? The rise of anti-politics, anti-expert, anti-system politicians, of which Donald Trump is just one example. Is there a way of saving democracy from its own failures?

Leading social philosopher and former political scientist Roman Krznaric offers a new roadmap for reinventing democratic politics in the twenty-first century. He calls it ‘Carpe Diem Politics’, an innovative and powerful approach to political change based on the seize-the-day ideal dating back to the Ancient Romans. Drawing on examples ranging from the Spanish Revolution and the fall of the Berlin Wall, to the Occupy Movement, the Tea Party and the Alt-Right, Krznaric argues that we need a new politics of mass action focused on seizing opportunities, spontaneous mobilisation and hedonistic revelry. In an age of digital distraction, where we are more interested in being political spectators than active political citizens, we need the energetic impulse of Carpe Diem politics to catapult us out of apathy into a reinvigorated, progressive democratic era.

Join in the Conversation #RSAact 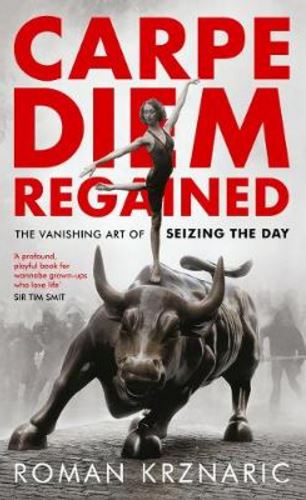 Carpe Diem Regained: The Vanishing Art of Seizing the Day