Inside the New Politics

An era of unprecedented change has called an end to the way we do politics. What comes next?

Years of uncertainty and stagnation have exposed the failings of a political system no longer fit for purpose, from our leaders and their parties to the processes that select them. But disillusionment with the traditional levers of government has not, as we’re often told, just led to disengagement and defeatism: it has given rise to a powerful new political paradigm, mobilised by ordinary people seeking new forms of agency, representation and action.

We can see the symptoms of our political turmoil, but what about the causes? And what does the future hold? Journalist Jack Shenker takes an inside look at the new grassroots political movements rising from the ashes of politics as we’ve known it, introducing us to the leaders of tomorrow: the people changing things for themselves. From community campaign groups to ‘McStrikes’ to climate activism, he explores the transformational political behaviour paving the way for a new politics that reimagines the meaning of power.

Join in the Conversation #RSApolitics 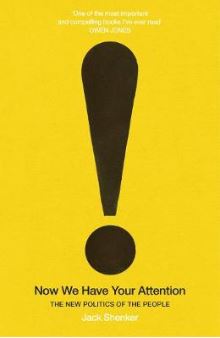 Now We Have Your Attention: The New Politics of the People