Liberalism Lost - 30 Years After the Fall of the Wall

After the fall of the Berlin Wall, why did the transformation of Eastern European countries give rise to a rejection of liberalism, not only in the East but also in the heartlands of the West?

In their new book The Light That Failed: A Reckoning, political scientists Ivan Krastev and Stephen Holmes describe the post-Cold War, new world order as the ‘Age of Imitation’ - a period of Western democratisation in which Eastern European values would be bent to fit a liberal fiscal, cultural and moral politics of ‘integration.’

Why did the attempt to help Eastern European countries reorganise their societies result in a rejection of liberal democratic principles? And what made Russia turn from being a potential ally to the West?

Join Ivan Krastev at the RSA as he explores why the ‘Age of Imitation’ failed to deliver prosperity, equality or national pride to the Eastern Bloc – and led to today’s crisis of liberalism in both the East and West.

Join in the Conversation #RSAliberalism 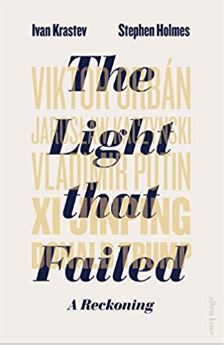 The Light that Failed: A Reckoning