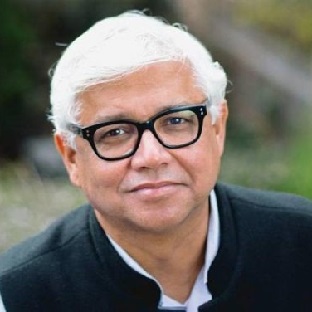 Amitav Ghosh was born in Calcutta, and grew up in Bangladesh, Sri Lanka, and India. He studied at the universities of Delhi and Oxford and published the first of eight novels, The Circle of Reason, in 1986. The first novel in his Ibis trilogy, Sea of Poppies, was shortlisted for the Man Booker prize. He has gone on to sell over three million books worldwide, and his work is translated into 33 languages. His essays have appeared in The New Yorker, The New Republic and The New York Times.The Great Derangement: Climate Change and the Unthinkable, a work of non-fiction, was published by the University of Chicago Press in 2016 and was given the inaugural Utah Award for the Environmental Humanities in 2018.

Amitav Ghosh holds two Lifetime Achievement awards and four honorary doctorates. In 2007 he was awarded the Padma Shri, one of India's highest honors, by the President of India. In 2010 he was a joint winner, along with Margaret Atwood of a Dan David prize, and 2011 he was awarded the Grand Prix of the Blue Metropolis festival in Montreal. In 2018 the Jnanpith Award, India’s highest literary honor, was conferred on Amitav Ghosh, the first English-language writer to receive the award. In 2019 Foreign Policy magazine named him one of the most important global thinkers of the preceding decade.