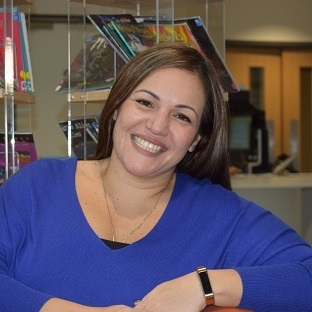 Andria teaches at Alperton Community School, a secondary school academy in the inner city borough of Brent. Brent is one of the most ethnically diverse places in the country and 130 languages are spoken in its schools. Its pupils come from some of the poorest families in Britain, many sharing one house with five other families, many exposed to gang violence. Children arrive at the school with limited skills and already feel isolated from staff and one another, making engaging with them all the more vital, but all the more difficult.

Working as an art and textiles teacher and as a member of the senior leadership team tasked with earning the trust of her pupils and their families to understand the complex lives they’ve come from, Andria redesigned the curriculum across all subjects from scratch – carefully working alongside other teachers – to have it resonate with her pupils.

Learning the basics of many of the 35 languages in Alperton’s pupil population, Andria has been able to reach out to her once marginalised students to earn their trust and, crucially, establish relationships with their parents. Thanks to her efforts, Alperton is now in the top 1 to 5% of the country in terms of qualifications and accreditations.

In her own art classes, Andria has creatively redesigned the curriculum, even bringing in an “Artist in residence” to promote inspiration and help pupils cope with the responsibilities of their complex home circumstances. As a result, Alperton has been awarded specialist school status in visual arts.

Andria’s determination to move beyond an identikit school curriculum has seen Alperton awarded the Institute of Education’s Professional Development Platinum Mark, an honour fewer than 10 British schools have ever achieved.

In March 2018, she became the first ever UK winner of the Varkey Foundation Global Teacher Prize, a US $1 million award presented annually to an exceptional teacher who has made an outstanding contribution to their profession.