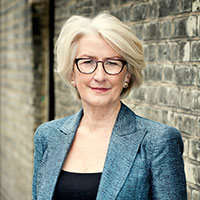 Ann Pettifor is Director of Policy Research in Macroeconomics (PRIME), and an Honorary Research Fellow at the Political Economy Research Centre of City University, London. Her background is in sovereign debt. Ann was one of the leaders in the Jubilee 2000 debt campaign, which succeeded in writing off $100 billion of debts owed by 42 of the poorest countries. Ann was also one of the few to correctly predict the credit crunch of 2007 in NEF's Real World Economic Outlook (Palgrave 2003) and in her book The Coming First World Debt Crisis (Palgrave 2006).

Additionally, Ann is co-author of The Green New Deal, a transformational economic programme published by NEF(July 2008) and designed to substantially reduce the use of fossil fuels while in the process tackling unemployment and the decline in demand caused by the credit crunch of 2007. She is also co-author of the Green New Deal group’s The Cuts Won’t Work and of PRIME’s ground-breaking analysis of 100 years of UK public debt and its impact: The Economic Consequences of Mr. Osborne. Her latest publication is Just Money: How Society Can Break the Despotic Power of Finance, published by Commonwealth Publishing in January, 2014.