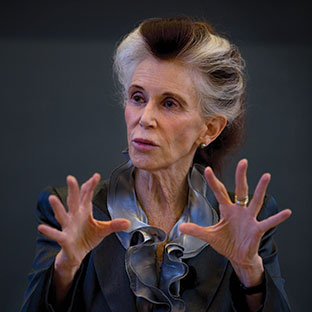 Catharine A. MacKinnon is Elizabeth A. Long Professor of Law at the University of Michigan and James Barr Ames Visiting Professor of Law at Harvard Law School (long-term), and a lawyer, teacher, writer and activist on sex equality issues domestically and internationally. She is among the most widely-cited legal scholars in the English language, and is one of feminism’s most significant figures.

MacKinnon practices law, consults nationally and internationally on legislation, litigation, and activism, and works regularly with the Coalition Against Trafficking in Women (CATW), and The ERA Coalition. Serving as the first Special Gender Adviser to the Prosecutor of the International Criminal Court (The Hague) from 2008 to 2012, she helped implement her concept “gender crime.” In 2014, she was awarded the Ruth Bader Ginsburg Lifetime Achievement Award by the Women’s Section of the American Association of Law Schools, and is an elected member of the American Law Institute (ALI).

MacKinnon is the author of many books, including Sexual Harassment of Working Women (1979), Feminism Unmodified (1987), Toward a Feminist Theory of the State (1989), Only Words (1993), Women's Lives, Men's Laws (2005), and Are Women Human? (2006). Her latest book, Butterfly Politics, was published in April 2017 by Harvard University Press. She is widely published in scholarly journals and the mainstream media.