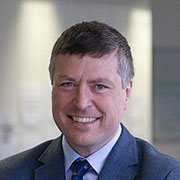 Ciarán Devane took up the role of Chief Executive of the British Council in January 2015.

Ciarán was educated at University College Dublin where he gained first-class honours in biochemical engineering. He then started his career as an engineer and manager with Imperial Chemical Industries (ICI) working across several businesses, functions and geographies. He later joined Gemini Consulting where he led multi-country change programmes for companies such as DuPont, AstraZeneca and Glaxo. He also holds a Masters degree in International Policy and Practice from the George Washington University, Washington DC.

Ciarán joined Macmillan Cancer Support as Chief Executive in May 2007. There he developed the strategy which transformed the scale and impact of what the charity does, both on its own and in collaboration with other organisations, and raised its profile as an authoritative voice on cancer and on health. During his time at Macmillan, the charity doubled in size not only in terms of income, but also in terms of reach and impact. The charity also increasingly moved beyond clinical care, placing more emphasis on whole-person care. Ciarán is a trustee of the National Council for Voluntary Organisations and is a Non-Executive Director of NHS England and of Social Finance Ltd.