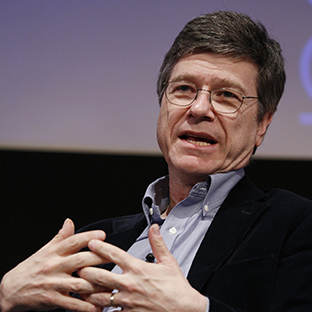 Director of the Earth Institute and Quetelet Professor of Sustainable Development, Columbia University

Jeffrey D. Sachs is a world-renowned professor of economics, leader in sustainable development and senior UN advisor. He is the co-recipient of the 2015 Blue Planet Prize, the leading global prize for environmental leadership. He has twice been named among Time Magazine’s 100 most influential world leaders. He was called by the New York Times, “probably the most important economist in the world”. A recent survey by The Economist Magazine ranked Professor Sachs as among the world’s three most influential living economists of the past decade.

Sachs is co-founder and Chief Strategist of Millennium Promise Alliance, and is director of the Millennium Villages Project. He has authored six books: The End of Poverty (2005), Common Wealth: Economics for a Crowded Planet (2008), The Price of Civilization (2011), To Move the World: JFK’s Quest for Peace (2013) and The Age of Sustainable Development (2015) and the latest book, Building the New American Economy: Smart, Fair & Sustainable (February 2017).