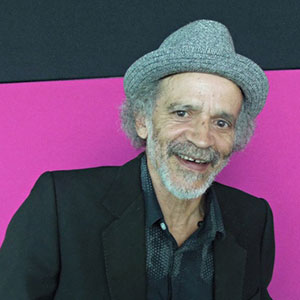 Poet, playwright, and recipient of the Queen's Gold Medal for Poetry in 2012

John Agard worked for the Guyana Sunday Chronicle newspaper as sub-editor and feature writer before moving to England in 1977, where he became a touring lecturer for the Commonwealth Institute, travelling to schools throughout the UK to promote a better understanding of Caribbean culture. In 1993 he was appointed Writer in Residence at the South Bank Centre, London, and became Poet in Residence at the BBC in London, an appointment created as part of a scheme run by the Poetry Society in London. He also played a key role in the 'Windrush' season of programmes in 1998. He won the Paul Hamlyn Award for Poetry in 1997 and has travelled extensively throughout the world performing his poetry.

His published poetry includes Man to Pan (1982), winner of the Casa de las Américas Prize, Limbo Dancer in Dark Glasses (1983), Mangoes and Bullets: Selected and New Poems 1972-84 (1985) and Weblines (2000). He is also the author of many children's books, including Lend Me Your Wings (1987), shortlisted for the Nestlé Smarties Book Prize, and Hello New!: New Poems for a New Century (2000), named by the Poetry Society as a Children's Poetry Bookshelf Best Anthology. He has contributed to, and edited, several anthologies, including The Penguin Book of Caribbean Verse (1986), and is also co-editor of A Caribbean Dozen (1994) with his partner, the poet Grace Nichols, with whom he also co-wrote No Hickory, No Dickory, No Dock in 1991. Their latest collaboration is Tiger Dead! Tiger Dead! Stories from the Caribbean (2008).

John Agard lives in south-east England. His poetry collection We Brits (2006), was shortlisted for the 2007 British Book Awards Decibel Writer of the Year award, and The Young Inferno (2008), a poetic reworking of Dante's Infernofor young people, won the 2009 CLPE Poetry Award. His latest poetry collection is Clever Backbone (2009). A further Selected Poems, Alternative Anthem, was also published in 2009.