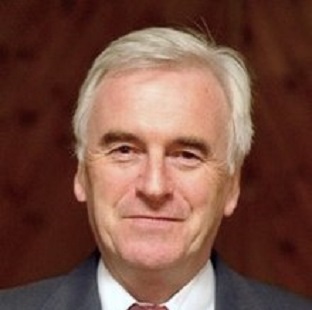 Shadow Chancellor of the Exchequer

John McDonnell was born in Liverpool and raised in Norfolk. On leaving school John worked on the shopfloor as a production worker. After studying at nightschool he went to University and subsequently became a trade union official with the NUM and later with TUC.

In 1981, he was elected to the Greater London Council as the member for Hayes and Harlington.  John became Chair of Finance, responsible for the GLC’s £3billion budget. After the abolition of the GLC he became Head of Policy at Camden Council and was Chief Executive of the Association of London Government before being elected in 1997 as the Labour MP for Hayes & Harlington, West London.

In September 2015, under Jeremy Corbyn’s leadership, he was appointed Shadow Chancellor of the Exchequer. As Labour’s Shadow Chancellor, John McDonnell has been heading up the development of Labour’s New Economics programme, building a consensus around the need for more long-term, patient investment from Government. As part of that work, he has been touring the UK holding lectures and seminars to involve people in the conversation.

Since becoming Shadow Chancellor, John has led the development of Labour’s economic strategy. During the 2017 general election John produced a fully costed economic programme detailing the taxation and spending decisions Labour intend to take in government, the most comprehensive costing exercise provided by any political party at an election in recent times.