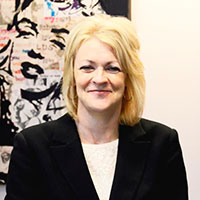 Lorraine Allen has been Principal of Whitley Academy in Coventry since January 2004.  Whitley is an 11 – 18 school in an area of significant social deprivation.

Prior to her appointment at Whitley Academy she was Deputy Head and Assistant Principal in Leicestershire schools.   She has taught across all ages and abilities KS3 – KS5 in the secondary phase.

On appointment at Whitley there was a need for significant cultural and structural change to secure improvement at a number of levels, under Lorraine’s leadership Whitley has transformed from a position of near Ofsted Category to an “Outstanding” Ofsted judgement in both 2010 and 2013.

In 2007 Lorraine became a National Leader of Education and has so far supported 19 schools in both the primary and secondary sectors, all needing to urgently raise their outcomes.  Every school has subsequently shown good or great progress, either in terms of their results or by being re-graded by Ofsted.

Lorraine was a founding member of the RSA Family of Academies, Whitley Academy, as part of its obligations as a converter to support other schools, became School Improvement Partner to two other schools in Redditch, in April 2014 RSA Academy Arrow Vale was graded as “Outstanding” by Ofsted, and in September 2014 Ipsley RSA Academy was graded “Good”.  She has recently qualified as an Ofsted Inspector.

She has visited many schools internationally as part of study visits including Ekaterinburg, Russia; Paarl, South Africa (link school – New Orleans High School); Prague and an NLE Benchmarking for success study tour to Singapore and Australia in November 2013.