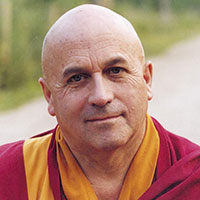 Matthieu Ricard is a Buddhist monk, author, translator and photographer who has lived in the Himalayan region for over forty years. He was born  in France and has a PhD in cell genetics but left the world of research to focus on Buddhist practices, living in India, Bhutan and Nepal and studying with some of the greatest Buddhist teachers.

Matthieu has served as the French interpreter for the Dalai Lama since 1989. He is board member of the Mind and Life Institute, an organization dedicated to collaborative research between scientists and Buddhist scholars and meditators. He is engaged in research on the effect of mind training and meditation on the brain at universities around the world. He is the author of several books including Happiness and The Art of Meditation. He donates proceeds from his book and much of his time to Himalayan humanitarian projects.