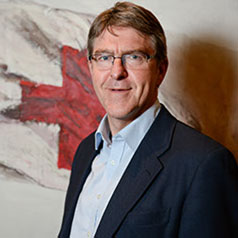 Prior to his current appointment, Mike was Managing Director of Operations, responsible for the leadership of the British Red Cross' UK and international programmes and its advocacy work. He had previously held several other positions in the organisation between 1992 and 2003, including Head of International Programme Development, Director for the London and South-East Region and Director of Strategy, Planning and Information Systems.

In his years away from the British Red Cross, Mike worked for the NHS as Director of Commissioning and Primary Care at a Primary Care Trust in Gloucestershire and as Managing Director for Services at the Royal National Institute for Deaf People (RNID – now Action on Hearing Loss).

Mike lives in Gloucestershire with his wife Lorna and two daughters Eleanor and Sophie. In his spare time he likes to run, cycle and read – he is also a founding member of his local film club.

Mike has an MPhil in economics from Oxford University and an MBA with distinction.