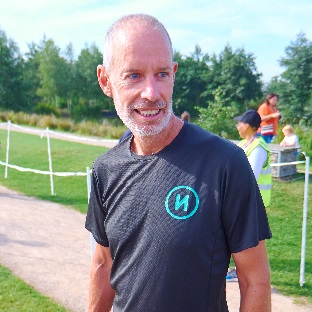 Paul’s contribution to the world of running came about through his own love of the sport; after an injury prevented him from running he began an informal 5k run around his local park one Saturday morning in 2004, inviting a few friends to join him. The format of a free, weekly, timed, 5k run quickly gathered speed becoming what we now know as parkrun. parkrun also offer a junior programme for people aged 4-14 consisting of a 2km run.

Today there are parkruns in over 2,000 locations around the world including over 700 in the UK. parkruns operate in the UK, Ireland, Australia, Denmark, United States, Canada, Sweden, Poland, Russia, South Africa, New Zealand, Italy, Singapore, Malaysia, Finland, Norway, Japan and France. Over a 3 million people have taken part in this uniquely accessible and social run, which has opened the possibility of wellbeing and social cohesion to all people regardless of ability or age.

Having already been declared by Runner’s World magazine to be one of their ‘Heroes of Running’, Paul was awarded the CBE by Queen Elizabeth II for services to grassroots sports participation in 2014.

Paul’s own running history was as an athletics club member competing in various distance races including marathons, until injury forced him to take a break. He is now back enjoying his running again, alongside working with the team delivering the parkrun phenomenon.

Paul has completed in excess of 380 parkrun at over 180 different events.