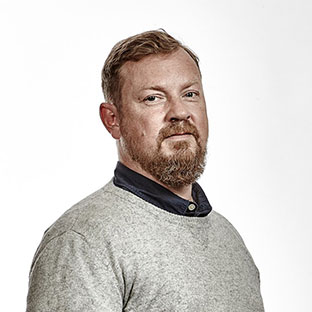 Over the course of his nearly quarter-century career, Richard Clarke’s work has been as varied as it has been creative. He has brought his unique vision to almost all aspects of footwear and apparel design. Richard currently serves as Nike's Vice President of Design overseeing Direct to Consumer (DTC) Advanced Innovation.

After beginning his career at J. Crew as a Design Director, Richard joined Nike in 1995. He worked first as a Nike Footwear Design Director and then as Global Creative Director for Sportswear. During this time, Richard worked on or led some of Nike’s most forward-thinking projects and collaborations, including the ahead-of-its-time modular design of the Zvedochka with Marc Newson, the ERP with Comme Des Garcons and the Ovolo. Richard also brought his “less-is-more” sensibility to Considered Design, Nike’s sustainable design ethos. As part of this initiative, he designed the first Considered collection, including the Considered Boot, a shoe that was not only memorably striking, but that also a new standard of sustainable design at Nike as well as winning a IDSA Gold Award.  For the past five years, Richard has applied his design talents to the retail arena. First as Global Creative Director of Direct to Consumer Design and now as Global Vice President of Direct to Consumer Design, Richard has shaped some of Nike’s most significant retail concepts, such as the company’s flagship store in, Nike Tokyo, Berlin, Shanghai, Miami and NYC. He also developed Kicks Lounge and NikeLab which is also influenced by ‘Considered Design’ to name just a few.

Whether designing shoes, apparel or retail environments, Richard infuses his work with his belief in design’s capacity to awaken the potential in everyone and his commitment to design as a powerful tool to change the world for the better.