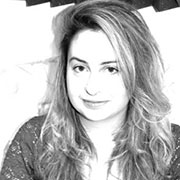 Film and arts composer and multi-instrumentalist

Though trained initially as a classical harpist and pianist, as a composer Sarah Warne specialises in the blending of acoustic instruments with unique electronic signatures. Her breadth of experience, with more than 70 projects across a whole spectrum of genres already in her portfolio, allows her to provide diverse solutions which meet the style and mood of each film, while also retaining her own unique creative voice. Whether composing with melodic lyricism or crafting a subtle textural underscore, drama and story-telling is always at the core of what Sarah creates.

Sarah’s commercial and broadcast clients include National Geographic, Random House Publishing, Ford, British Telecom, Kopparberg, Tate Gallery, In Focus Asia, Very! Productions, and Rupert Newman Design. Her devotion and commitment to independent cinema has also seen much of her work premiere on the international film festival circuit, most recently scoring The Magnificent Lion Boy, officially selected at 66th Festival de Cannes 2013; Vegas officially selected at Hot Docs, Toronto 2013, and Charlie Says, making its world premiere at Edinburgh International Film Festival 2013. More of Sarah’s work will feature at Anima Mundi (Sao Paulo), and This is England (Rouen) later this year. In addition to film scores, Sarah frequently works with Installation Artist Rupert Newman. As a duo, they create multi sensory digital installations, which interact with architecture & 3D textile designs (previous installations). Their work has been exhibited at Boom Festival (Portugal), The Cobden Club, The Crate, and The Royal College of Art. Their next installation Son e Lumiere is to commemorate the 700 year Anniversary of Exeter College, Oxford - a historical journey projection mapped across the front of the College itself.

In 2015, Sarah has been writing scores for Feature Fiction ‘Following Footsteps’, music for BBC’s ‘The Treasures of Ancient Greece’ (3x60 documentary episodes), BBC short dramas ‘Oakwood’ and ‘Is This Thing On?’, as well as commercials for Dove and Mark Farley. She attended FIFA 2015 in Aubagne, France between 19th-22nd March as a guest of the festival, having been nominated in the Best Music category with the Film ‘Prick Thy Neighbour’ directed by Tara Fitzgerald (Game of Thrones).