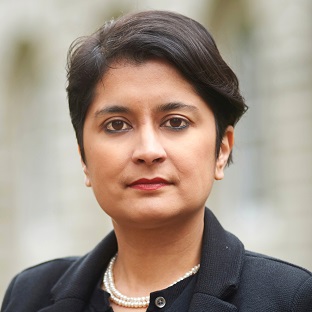 Shadow Attorney General and member of the House of Lords

Baroness Shami Chakrabarti, Shadow Attorney General and member of the House of Lords.

Baroness Chakrabarti was Director of Liberty, the National Council for Civil Liberties from 2003 to 2016, and a member of the panel of the Leveson Inquiry, the judicial inquiry into UK phone hacking in 2011.

Called to the Bar in 1994 she worked as a lawyer in the Home Office from 1996 until 2001 for Governments of both persuasions.

Shami’s first book, On Liberty, is published by Penguin. Her second, Of Women, will be published in Autumn 2017.