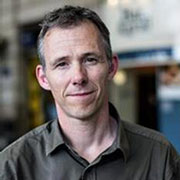 Tim Bale graduated from Gonville and Caius College, Cambridge. After teaching English in Spain, he did a Masters Degree at Northwestern University in the USA. Following a few years spent working for the NHS, he returned to do a PhD at the Department of Politics at Sheffield University, where he then lectured for a year.  After Sheffield, he taught politics at Victoria University of Wellington in New Zealand until 2003 and then at Sussex University until 2012. For four years he was the co-editor of the European Journal of Political Research's annual Political Data Yearbook. In 2008 he won the Political Studies Association's Bernard Crick Prize for Outstanding Teaching.  He was the co-founder of the PSA's specialist group on Conservatives and Conservatism. He also provides an Internet Guide to European Politics to accompany his book, European Politics: a Comparative Introduction, the third edition of which was published in the spring of 2013. Tim's media work includes writing for the Financial Times and the Guardian, and he has appeared on various BBC radio and television programmes. In 2011 he received the Political Studies Association's W.J.M. Mackenzie prize for his book The Conservative Party from Thatcher to Cameron. His latest book is Five Year Mission: The Labour Party under Ed Miliband.