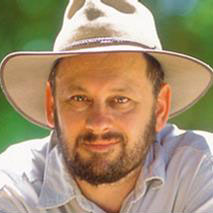 Tim Flannery is one of Australia’s leading thinkers and writers. An internationally acclaimed scientist, explorer and conservationist, Tim’s books include the definitive ecological histories of Australia (The Future Eaters) and North America (The Eternal Frontier). He has published more than 100 peer-reviewed papers.

As a field zoologist he has discovered and named more than thirty new species of mammals (including two tree-kangaroos) and at 34 he was awarded the Edgeworth David Medal for Outstanding Research. His pioneering work in New Guinea prompted Sir David Attenborough to put him in the league of the world’s great explorers and the writer Redmond O’Hanlon to remark, “He’s discovered more new species than Charles Darwin.”

He is a regular contributor to The New York Review of books and The Times Literary Supplement and has edited and introduced many historical works, including The Birth of Sydney, The Diaries of William Buckley and The Explorers. He received a Centenary of Federation Medal for his service to science and in 2002 he became the first environmentalist to deliver the Australia Day address to the nation.

Tim Flannery spent a year as professor of Australian studies at Harvard, where he taught in the Department of Organismic and Evolutionary Biology. In Australia he is a leading member of the Wentworth Group of Concerned Scientists, which reports independently to government on sustainability issues.

A familiar voice on ABC Radio, NPR and the BBC for more than a decade, he is also known to viewers of the Documentary Channel as writer-presenter on the series The Future Eaters (1998), Wild Australasia (2003), Islands in the Sky (1992) and Bushfire (1997). He was a principal consultant on the SBS series The Colony (2004) and is currently Australian consultant-presenter for the international series ATLAS.

Tim Flannery was named Australian of the Year the day before Australia Day on 25th January 2007.