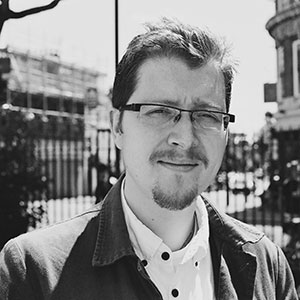 Poet and director of Penned in the Margins

Tom Chivers is a poet and director of Penned in the Margins, an independent poetry publisher. In 2008 Tom was Poet in Residence at the Bishopsgate Institute. In September 2009 Radio 4 broadcast his documentary about the poet Barry MacSweeney. He won an Eric Gregory Award in 2011. In the same year, his poem ‘The Event’ was made into an animated film by Julia Pott for Channel 4’s Random Acts. In 2013 Tom worked with Cape Farewell on ADRIFT – an investigation of urban landscapes. As part of this project, he devised two ‘urban pilgrimages’ – site-specific audio walks along London’s lost rivers – for Bishopsgate Institute and Southbank Centre. In November 2013 he was commissioned to make a psychogeographical dream-walk up the River Hull, resulting in the long poem Flood Drain (Annexe Press, 2014). In 2014 he was shortlisted for the Edwin Morgan Prize. Most recently he co-created (with James Wilkes) The Listening Post: an immersive audio installation for LIFT Festival at Battersea Arts Centre. His publications include the poetry collection How To Build A City (Salt Publishing, 2009), the pamphlets The Terrors (Nine Arches Press, 2009; shortlisted for the Michael Marks Award) and Flood Drain (Annexe Press, 2012), and, as editor, the anthologies Adventures in Form and Mount London: Ascents in the Vertical City (Penned in the Margins, 2012 & 2014).