Addressing Economic Insecurity makes the case that economic insecurity is a political, economic and societal challenge that public policy must understand and address.

Economic insecurity impacts a broad spectrum of society – not only those in persistent and structural poverty and precarious economic circumstances, but also low and middle income groups: those who self-identify as ‘just about managing’ and those whom government labels as ‘ordinary working families’. Economic insecurity relates closely to issues in the workplace and the labour market, but encompasses wider material as well as psychosocial elements experienced by households, communities and places, encompassing networks of social support and public services.

The report is part of a long-term collaboration with Nottingham Civic Exchange, a civic think tank established by Nottingham Trent University. This programme – Out of the Ordinary – involves assessing, analysing and planning collaborative action to address the contemporary challenges of ordinary working families.

The RSA defines economic security as: "The degree of confidence that a person can have in maintaining a decent quality of life, now and in the future, given their economic and financial circumstances."

The evidence within the report establishes that economic security matters alongside more traditional policy goals around employment, inequality and poverty. Economic security itself should become a prime focus of national debate, policy and institutions. Unlike poverty or even inequality, the idea of economic security and insecurity is one to which most people – including many families with above average incomes – relate. The report draws on a commissioned Populus survey of 2,083 British adults.

Economic security, and so a person or household's opportunity and prospective well-being, cannot be understood purely as a data-based designation but as something which combines objective factors and subjective experience and expectation. Two people with the same jobs and the same income can both have, and feel they have, very different prospects.

The economic consequences of economic insecurity result in a vicious circle. Unless there is security, progression in work and life become difficult, and this in turn has a cost in terms of economic growth and productivity. That then makes it difficult to ensure further policy measures to support economic security through investment in people, places and services become more difficult to sustain.

Ultimately, economic security is not just about income but about assets, resilience, adaptability, confidence and support networks – from the family to the state.

The report recommends that government looks to health, housing and welfare as areas where economic policy and social policy could be rebooted to address economic insecurity.

In integrating policy areas, devolving relevant regulatory and policymaking powers to regional or local level will allow for local government and combined authorities to better customise policy to respond to the dynamics of their local economy. Policymaking should also be better informed by practice and by the lived experience of people those policy measures are designed to benefit – something explored in the RSA’s Citizens’ Economic Council.

Read the report on Medium 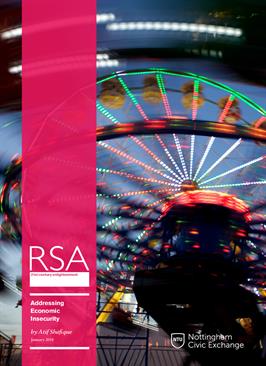