There is an increasing global conversation about the idea of a ‘Universal Basic Income’ – a universal weekly payment to all eligible citizens. Finland, the Netherlands, Canada and Switzerland are all looking at the idea. Meanwhile, it has been gathering interest amongst the US tech community who fear the social impacts of rapid technological change. But is it simply a Utopian vision or could it work it practice?

The RSA has been looking at the idea as a possible replacement for the current tax and benefits system. In this report, Anthony Painter and Chris Thoung outline what a Basic Income could look like in practice. They conclude that there is a strong practical case for the Basic Income – it underpins security, replaces the complexity of the current system, and provides a platform for freedom and creativity.

Our economy will face enormous technological change with significant social consequences.  An ageing society needs to support carers. Moreover, the current welfare state is increasingly intrusive, complex and ineffective. These drivers suggest that we are nearing the point when a fundamental rethink is necessary.

The report outlines the RSA’s model of Basic Income. This model manages some of the negative distributive consequences of traditional Basic Income schemes. It redistributes towards those with families – especially young families. What this means in practice is that there could be an easier transition to a Basic Income system.

Beyond support for Basic Income as an idea and a model, the report recommends that, like the Netherlands, a Basic Income pilot is established in the UK at city-wide scale. It is then that the proposed benefits could be rigorously tested.

Find out more about our work on Basic Income 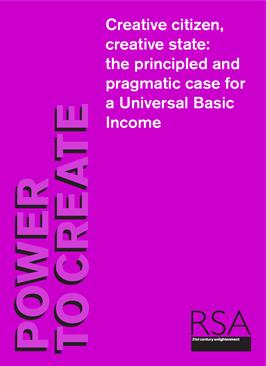