It is now almost three years since the RSA entered the discussion about the potential offered by a Universal Basic Income (UBI). This report is our third and has a different purpose to the previous two reports. Whereas previously the RSA has sought to provide an analysis of the underlying case for a UBI, including the likely wider impacts on the tax and benefits system, this report is designed to think about how we can test a UBI in the UK and other contexts.

Our hope is that we can provide some support for those who would like to see a series of UBI experiments or pilots in the UK and beyond. Realising Basic Income is published as four localities in Scotland are considering the feasibilities of UBI pilots (with other Basic Income related experiments underway in Finland, Kenya and elsewhere). Support for these feasibility studies from the Scottish Government is indicative of just how far this discussion has moved from fringe to mainstream.

The RSA entered this discussion out of concern for the negative impacts of the current system of income supports, latterly in the guise of the expanding system of Universal Credit. There are two important functions for a modern welfare state – to provide a decent level of economic security and support individuals and families as they seek to navigate the modern economy and society. A recent large-scale academic study into welfare conditionality, The Welfare Conditionality Report, found the current system to be ineffective in enhancing motivations to work, leading to increased destitution, harmful to mental and physical health, with insufficient support for individuals. Meanwhile, the National Audit Office found evidence of financial hardship caused by the rollout of Universal Credit.

So it is right to be concerned about the current system of supports. And UBI is one possible alternative that has captured some imagination. In an opinion survey published alongside this report, we found that 41 percent of respondents supported a UBI in principle with 17 percent against. UBI is seen as superior to the current system in providing economic security by 45 percent to 13 percent. There are concerns about its affordability and mixed feelings about UBI’s potential to incentivise work. All these positions are hypothetical of course. And this turns us toward the need for experiments.

Charlie Young has put together a detailed report that explores how such experiments could work. He maps a version of UBI that links into local public, private and civic supports rather than UBI as a single golf club. This stands in opposition to a naive ‘magic bullet’ approach. The models and toolkits contained within this report should help those considering establishing live experiments and that is this report’s prime intention.

Our survey found that people favour local experiments by a margin of 40 percent to 15 percent. Many are undecided and this points to the need for strong, local citizen engagement as this report advocates in the context of UBI experiments.

We continue to be concerned at the capacity for the current system to provide for economic security with significant concern that the system may even undermine it. In a decade where the UK is expected to leave the EU, where the impacts of automation and AI are as yet unknown, and where levels of economic insecurity are already high, there is a strong case for considering alternatives. UBI experiments will enable a richer public dialogue – locally, nationally and beyond - about a very different approach and they may help allay some natural concerns. This report should help the quality of experimental design so that the public can consider, armed with the right information, whether a decisive change should be made to the way in which we seek to provide a degree of economic security for all. We look forward to working with a range of partners to help turn greater experimentation into UBI into a reality. 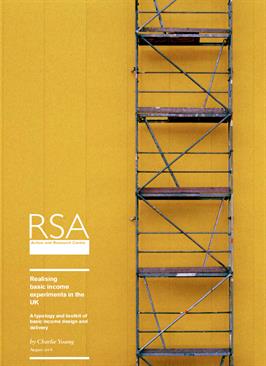