The four futures of work: coping with uncertainty in an age of radical technologies

Four Futures of Work, from the RSA Future Work Centre, which follows RSA chief executive Matthew Taylor’s employment review for the Prime Minister, argues that policy-makers should focus more on how automation will transform all work, not just lead to job losses.

Rising inequality, growing suppression in the workplace, stagnant wages, heightened discrimination and bias, and deepening geographic division could all have a bigger impact than simple job losses to robots

Based on detailed ‘scenario modelling’ with leading engineers Arup, the study details four very different ‘scenarios’ for the future of work in the UK: 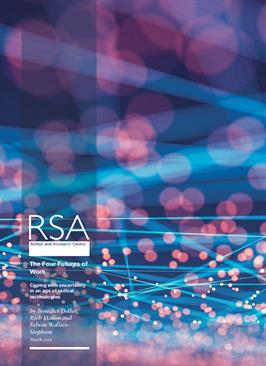