The Architecture of Food

On 27th June 2019, the second edition of Dialogue: Grow-Feed-Innovate, organized by the RSA Japan Fellows’ Network (RSA JFN), took place at the Balcony of Venture Cafe in Toranomon Hills.

The event was structured as a talk between three high-profile panelists and a moderator who explored how architecture and urban planning impact food supply in contemporary city life, and was followed by a Q&A.

Mike Kato FRSA, President and CEO of Japanese Greats, facilitated the dialogue between the speakers:

Také Kamio FRSA, Architect at studio DUCA architects and Fellow of the RSA (Royal Society for the encouragement of Arts, Manufactures and Commerce) and RIBA (Royal Institute of British Architects). 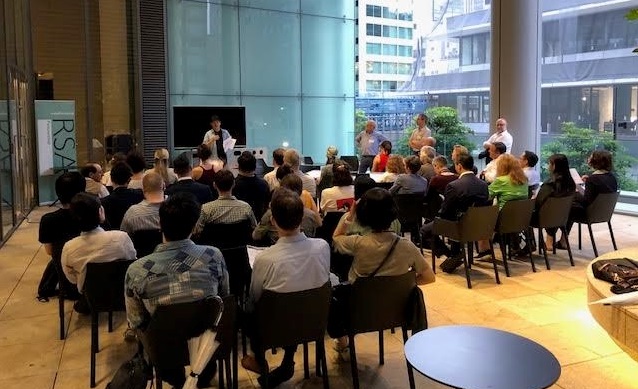 In the first part of the discussion Mr. Kato suggested to lay out some key themes and definitions. Mr. Galloway then began talking about the possibility of farming inside cities; the challenges within this, but also the opportunities. He spoke about how our living standards would rise and how considering nature positively would influence our quality of life. He warned that intensive cultivations may not always be the best response to our needs if the price to pay is to resort to pesticides and aggressive chemical products. Mr. St.Charles continued, pointing out how, despite of any possible effort to introduce vegetables and fruit cultivation in our cities, we probably could never renounce the extensive farming model predominant nowadays.

Mr. Kamio emphasized then the role of architecture as a crucial tool to introduce more nature into our lives, and, when it comes to food, he stated that being able to see the amount of time and care needed to produce it, we would drastically decrease the amount of waste. The question was how, concretely speaking, we could bring these concepts into our daily life.

“In the domestic sphere we may have some space and are basically free, but how about our offices?”

A common answer emerged, of how when we talk about nature and in particular sustainability, most of the time we imagine parks and changes in the landscapes of our cities. A more effective approach, though,  can be obtained focusing on the optimization of the space in our houses. “I teach sustainable design” Stated Mr. Galloway “And every time I highlight how a simple balcony can change our life and our relation with plants and food”. Mr. St.Charles mentioned vertical gardens as an easily applicable improvement in the atmosphere of the office and its air quality. The keyword in this regard is biophilia (from the Ancient Greek words of βίος “life”, and φίλος, “love”) and the belief that humans spontaneously tend to seek connections with nature. As Senior Operation Manager of his firm, he designed an area in the canteen where employees can grow a variety of vegetables and fruit during summer. His careful planning proved outstandingly successful: despite a 200% increase in office space and headcount, Hogan Lovells has seen the energy footprint increased by less than 25%. This operation also demonstrated that sustainability, when conceived from the right perspective and tackled in the adequate way, can be profitable.

“If so, what changes in our cities should be done, which issues should be faced in order to export and multiply this model?”

If sustainability can produce business, then the notion of “waste” must be re-formulated. Consequently, what is considered waste is simply something about which we are asking the wrong question: what is now waste tomorrow will be a resource. Some public offices in Japan are now collecting all the organic waste from the food in their cafeterias, easily turning it into compost and then distributing it for free to farmers and citizens. Moving from the countryside to our cities, though, the general condition of  squandering worsens: we are still very far from the ideal, and what is being done at a local level reveals to be a minuscule percentage of the whole.

A central role should be played by education, added Mr. Kamio. There is no real revolution without the commitment originating from instruction. When made aware, citizens will possess the sufficient knowledge to understand the consequences of every mismanaged pound of their waste.

Speaking about his office, Mr. St.Charles then described what he considered a “sneaky maneuver”. His original purpose was to use 100% recycled paper for his office, yet some managers opposed him, arguing that snow-white paper was needed, at least to print official copies of contracts. The compromise was to utilize recycled paper for internal use and “standard” one for formal documents. After six months, though, he addressed the management asking whether they were satisfied about the paper management: the feedback was positive. Only then did he reveal that the snow-white paper also was a recycled one. With its pros and its cons, a temporary solution sounding like “the illusion of choice” may reveal significantly successful.

Before the ending, the panelists were asked to give their opinion about the current situation in Tokyo in terms of food, architecture and sustainability. They were unanimous in saying that, if on the one the hand Japan may be considered avant-gardist in relation to new energies and the fight against waste (e.g. insulation), on the other hand it still does not apply extensively this system to all buildings –as it does with anti-seismic technologies-, and concerning the food waste and the architecture imagined to bring more nature and farming into daily life in particular, the general interest and level of action are still low.

As a conclusion, the panelists stated that a possible solution, in order to increase the sustainability in the relation between food and architecture could consist in a glocalized way: there is a need to take action on the largest scale possible, yet the context should be taken into consideration. Way too often, because of a focus on quantitative results, the process gets oversimplified and complexity is lost. It should instead be reinitiated with an element of flexibility, to valorize specific potentialities and to bend the means to the traits of the local conditions.