What sort of housing options do young people want?

The RSA partnered with OneManchester to explore the housing experiences, and challenges, of young people in Manchester.

We’ve been speaking to young people in the city about what they need and expect from their housing, and how their options, or lack thereof, match up. Our new report Making Home is the result of those conversations and a national poll of 18-34 year olds.

Here are 4 things we learned:

The current definition of ‘affordable housing’ is that rent should be no more than 80% of the market price in the area. The simple fact is this isn’t actually affordable for young people.

According to our poll, a third of young renters in England – and almost half in Greater Manchester – have had to cut back on food, drink or other activities in order to cover their housing costs. Others reported taking on a second job, taking out loans or living somewhere unsuitable or unsafe.

Our current ideas about affordability aren’t working for young people. For those taking out loans or falling behind on rent, the impact will be long term.

Affordable housing needs to be genuinely affordable. That’s why it should be linked with local incomes, not local house prices.

In the case of Greater Manchester, we recommend exploring a Housing Affordability Deal. This would bring local considerations into the definition of affordabilty and housing benefit levels. It would also include the power to create ‘Rental Pressure Zones’, a locally defined cap on the rate of increase of rent prices.

At the RSA, we talk about an idea called ‘economic insecurity’, which we define as the confidence an individual has that they will have enough money to get by in future, or if that feels fragile. For young people, housing is an important part of their sense of economic security.

Security in housing, money, and relationships are all are interconnected. For example, having to pay a deposit on a new flat before you get the old one back can cause money problems. This can put a strain on relationships. If a relationship breaks up, someone might have to move… 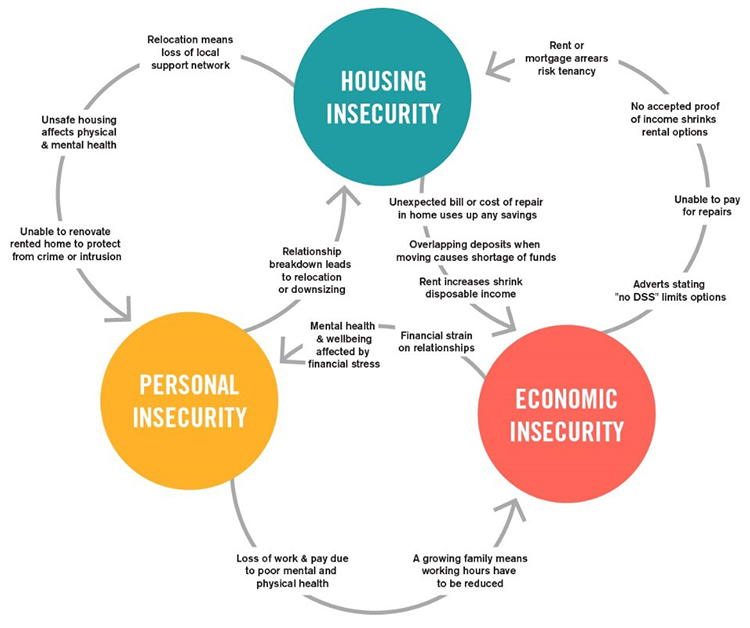 The most obvious way housing can impact security for young people is having to move a lot when renting. It’s hard to feel secure if you’re never sure how long you’ll live somewhere.

But insecurity goes beyond private renting. If you own your house, but have stretched yourself to buy, you might be worried about any surprise bills. If you’ve moved to a cheaper area to buy, you might not feel physically safe.

More generally, a lot of young people just feel like they don’t have a lot of choice.

These connecting feelings of not being ‘secure’ makes life feel precarious for too many young people.

Housing hasn’t kept up with the changing world of work

At the centre of these feelings of insecurity is modern work. The increasingly flexible way we work – from fixed-term contracts and probation periods to self-employment and the gig economy – has fundamentally changed how we earn money. But how we rent or get a mortgage hasn’t kept pace with this change.

In particular, modern working makes it harder to document and predict income. Even though a gig economy worker might be earning more than enough for the housing they want, they’ll struggle to prove it to a landlord or mortgage provider.

Credit can also be an issue locking young people out. Relying on debt is more common than ever, but it can be a barrier to rental contracts. If you’re on Universal Credit, you may be simply blacklisted from a lot of prospective homes.

Too many existing housing options are tied to paper and checks that are hard for young people, making them feel locked out.

Modern housing options for young people need to be able to take into account a more rounded assessment of their earnings and budget.

We need more options than just renting or buying

Our survey showed young people still want to own, and half wanted to do so in the next five years. But this is less and less likely to be a reality.

Young people explored how the two could work together to create a new option.

In Escalator Ownership, you would start paying a ‘Rent to Buy’ style reduced rent, to allow you to save, and owning 0% of a home.

Then, you could start to buy a percentage of your home and pay rent on the rest like Shared Ownership.

The flexibility of this innovative combination allows individuals to move at a pace that works for them, accumulating ownership from one percent at a time, whilst security is supported through the long term commitment.

This is just one of the ideas young people helped us to create. If we’re going to solve the housing crisis for young people, the first building block is to listen to them. And their voice is clear – they need more options.