The power of creative thinking

In the wake of RSA’s launch of the Ideal School Exhibition, FRSA Bill Lucas outlines what is meant by creativity in education and some progress in evidence and application.

For anyone interested in the work of the RSA it is likely to be clear that creative thinking is an important capability for success in life. It would follow from this that schools have a role in developing the capability to think creatively in their pupils. But in England my first sentence is not yet a statement of the obvious and within the noise generated by a focus on the English Baccalaureate and Attainment 8, developing creativity can all too easily get lost. And for some students the unfortunate result is that they have a much more restricted version of schooling than is desirable today.

Globally things are different. National curricula are becoming increasingly expansive making aspects of critical and creative thinking mandatory. In Australia, New Zealand, Finland and Singapore, for example, this is the case. Within the home nations of the UK there are advocates, too. In Scotland creative thinking is firmly embedded in the Curriculum for Excellence. In Wales, supported by its Arts Council of Wales, there is an exciting programme to develop creative schools.

A number of highly credible research-based organisations work across national borders and are advocating the importance of creative thinking. New Pedagogies for Deeper Learning and Partnership for 21 Century Learning are two good examples. There are also a number of individual advocates of whom the late Anna Craft, Guy Claxton, Michael Fullan, Sir Ken Robinson and the RSA’s Mathew Taylor are just a few. I would count myself in this list, too. Recently the RSA launched a new research project, Creativity in Adolescence, taking the concept of creative thinking into the wider community and exploring the sense of agency with which it potentially empowers young people to act for good.

But what do we all mean by creative thinking? It is the process by which we generate fresh ideas. It requires specific knowledge, skills and attitudes. It involves making connections across topics, concepts, disciplines and methodologies and it leads in turn to new understanding and impact. For nearly a decade my colleagues Guy Claxton, Ellen Spencer and I have been researching into this important concept at the University of Winchester. We have developed a five dimensional model of creative thinking. 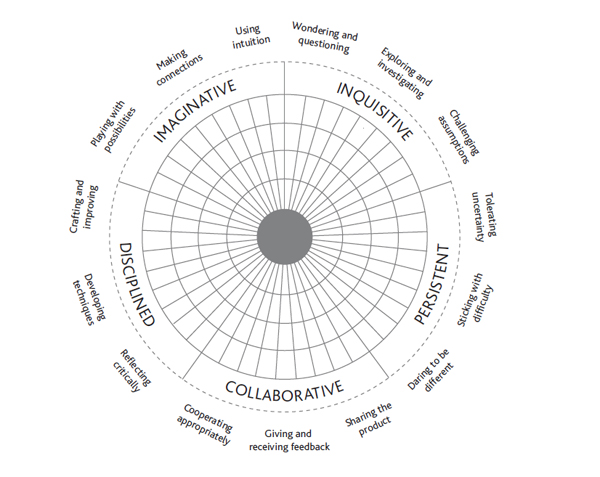 Creative thinking is a multi-dimensional concept. Each of the five areas contributes to what it is to be truly creative. Imagination helps us to play with possibilities and make new connections. Being inquisitive brings curious questions and necessary challenges to other people’s assumptions, which in turn requires a certain kind of persistence to dare to be different, along with a sense of discipline constantly to improve and reflect on progress made. And creative thinking is almost always a collaborative activity working across and between disciplines requiring high levels of cooperation.

The good news for schools is that creative thinking is both teachable and learnable, as Ellen Spencer and I lay out in detail in our recent book, Teaching Creative Thinking. Creative thinkers develop by being part of a school and community culture in which all of the five aspects of our model are actively encouraged. Within the classroom these five dimensions are most amenable to pedagogies, which encourage idea generation and critical thinking. These include challenging problem-based learning, design thinking approaches, playful experimentation and an explicit attempt to see classrooms as learning communities. There are schools such as Thomas Tallis, just a few miles away from the RSA, which are international beacons of excellence in the field of creative thinking.

Developing students who think creatively is, it turns out, just as demanding as teaching tricky mathematics or the nuances of grammar or scientific investigation and just as worthwhile.For young people preparing for a challenging and uncertain future, the capacity to think creatively will be an important underpinning capability. But you do not need to take my word for this. Lesley Gutman and Ingrid Schoon reviewed the evidence recently for the Education Endowment Foundation. Of various so-called ‘non-cognitive skills’, which most improve outcomes for learners, creativity along with other aspects of our model – perseverance and metacognitive strategies for example – are highly valued.

Recently the importance of creative thinking has been acknowledged by one of the ‘guardians’ of global comparative standards, the Programme for International Student Assessment (PISA). In 2021, as well as tests for 15 year-olds in English, Maths and Science, PISA will introduce a new test of Creative Thinking. I am honoured to have been appointed co-chair of the PISA Strategy Group for the development of this test, which will be based on our five-dimensional model, although, for reasons of obvious pragmatism, it will not try to measure everything.

I mention PISA not to stress the testing aspect (which will of course bring with it unintended consequences which need to be carefully thought through). No. The arrival of PISA 2021 Creative Thinking is a clear signal to all those who do not yet see its equal status with other core ‘literacies’ that times are changing.

Bill Lucas is Professor of Learning and Director of the Centre for Real-World Learning at the University of Winchester. With Ellen Spencer he has recently published Teaching Creative Thinking: Developing learners who generate ideas and think critically. Follow Bill @LucasLearn and Ellen @DrEllenSpencer.