Exploring the impact of Covid-19 on our dreams

“I’m with my family and boyfriend and we’re being chased by silent, almost invisible rats. I only see their tiny eyes and flashes of teeth behind us as we run.”

“My home was a Covid-19 test centre. People weren’t wearing masks. I’m taken aback because I wasn’t asked to be a test site. I’m worried that my husband and son (who actually lives out of state) will catch it because of my career.”

As the pandemic swept around the world, dream recall skyrocketed. The virus itself was the star of many of these dreams, either literally or in one of its metaphoric guises. As a dream researcher at Harvard University who has studied the dreams of prisoners of war (POWs), survivors of 9/11 and Kuwaitis during the first Gulf War, I was interested in what dreaming patterns might re-emerge during the pandemic? Alternatively, what dream metaphors would be unique to this historic moment?

On 23 March 2020 I posted an online survey that has since collected dreams from more than 4,000 people in 89 countriesand counting. I also discussed dreams with friends, in online dream chat groups, and over Zoom and live dreamwork sessions. My goal was to discover what our dream lives might reveal about our deepest reactions to the ongoing pandemic.

“Is anybody else having really weird/vivid dreams during this whole lockdown or is it just me?” @juustmolls

“I thought I had vivid dreams before but since quarantine they’ve been over the top realistic!” @litesue

Almost as soon as the pandemic started, people’s dreams became longer and more vivid, bizarre and memorable. A 2020 Lyon Neuroscience Research Center study found a 35% increase in dream recall. Twitter and Instagram posts with hashtags like #coronadreams, #covid19dreams, #quarantinedreaming and #pandemicnightmares went viral during the first three months of the pandemic.

The period we are living through is utterly unique in the shared dreamlife of humanity. While the 1918 pandemic was almost as widespread, we had limited ability then to share waking experiences with strangers on the opposite of the globe, much less nocturnal ones.
Any major historical event affects our dreams, and a crisis tips anxiety into the mix. I believe dreams are just thinking in a different biochemical state; since we are thinking more intensely and emotionally by day, of course our dreams are also more intense and emotional. I saw a surge in vivid dreams from Americans after 9/11, Kuwaitis during and after the Iraqi occupation, and British officers (whose dreams were recorded in a dream archive) in a Second World War Nazi POW camp.

Most crises are accompanied by less sleep: people experience insomnia from anxiety or stress, or must work harder to keep themselves and their families safe. Increased vividness in dreaming comes from heightened emotions, not increased dream time. During the pandemic, however, especially at first, we were told to stay home and avoid socialising. Even those who were working full time from home or taking virtual courses no longer spent time commuting or engaging in an array of tempting nighttime social activities. Studies showed we began sleeping much more than usual early in the pandemic.

Most dreams occur in rapid eye movement (REM) sleep. We enter REM every 90 minutes throughout the night, but each period gets successively longer. If you sleep for eight hours, the last dream period of the night is the longest and includes the most vivid dreams. When we are catching up on sleep, we have unusually long and intense dream periods. Starting early in the pandemic, but even now, people are having more vivid dreams of all kinds, and most of the reported dreams focused largely on the new threat. 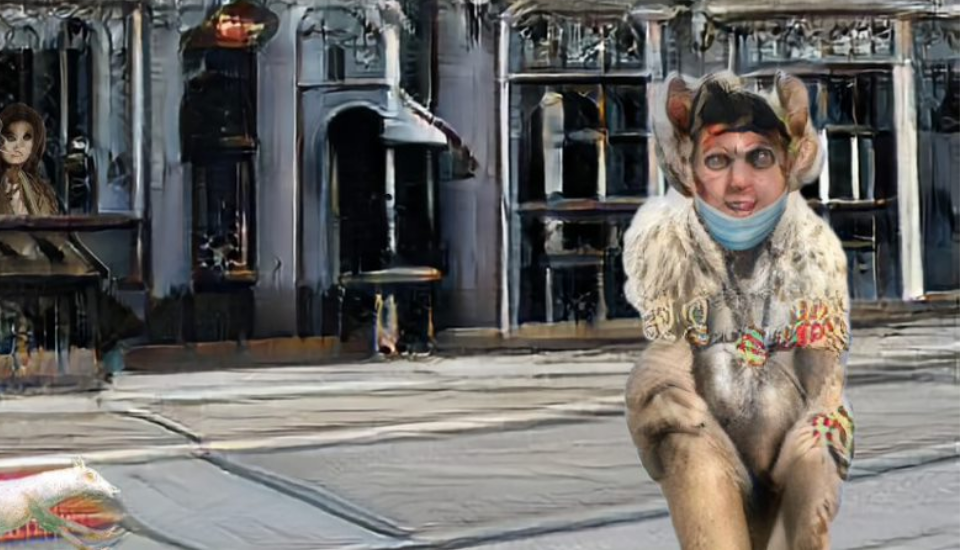 The period we are living through is utterly unique in the shared dreamlife of humanity.

“I have a reoccurring dream that we get a knock on our door and outside are people in hazmat suits. The door no longer opens because we haven’t used it in so long. The hazmats tell us someone in our home has Covid-19 as confirmed by Parliament. Since we’re unable to get out, we are going to die of it.”

Some of the dreams collected by my survey are simply about catching the virus: having trouble breathing or spiking a fever, dreaming that children or elderly parents are infected. Others dream of more fantastical symptoms: one woman looks down and notices bright blue stripes on her stomach and faux ‘remembers’ that this is the first sign of the virus.
The realisation that one has contracted the virus often ends a dream. In others, this realisation spurs a search for help. An array of attitudes towards the medical system play out on the dream stage. Some dreamers struggle endlessly to get to a hospital (“I ordered an Uber, but a hearse showed up instead.”) or to get attention once there (“The medical staff was marching and staring straight ahead; I wondered if they had been replaced by androids.”).

Attack of the metaphors

Not all dreams about the virus are literal. Negative experiences stimulate dreams of our most instinctive fears. Dreams of tsunamis, tornados, hurricanes, earthquakes, wildfires and mass shootings were common after 9/11 and other collective historic traumas and are showing up again in my pandemic dreams survey. One dreamer covered most of that list until she made a significant life change:

“I had constant dreams of glowing jellyfish, crumbling and cracking roads that were impossible to get out of without rolling the car, family members lined up on the wharf with a tidal wave coming, flying whales, blimps crashing over the sea, pushing boats across coral and rocks to safety with family and friends in the boat, rollercoasters, hiding and running and packing belongings . . . but all catastrophic dreams came to an abrupt halt when I made the decision to leave work and stay home with the virus starting to get out of hand . . . the VERY first night!”

Interestingly, the survey identified clusters of dream metaphors about Covid-19 unique to the nature of its threat. The most common of these metaphors is “threatening bugs”. Swarms of attacking flying insects, whether bees, hornets, wasps, gnats or horseflies. Masses of wriggling worms menace dreamers, or armies of cockroaches race towards them. Bedbugs, stink bugs, centipedes. Our dreaming mind is very visual, so when the dreamer feels fear, the mind searches for an image to match that feeling. Bugs express what many are feeling about Covid-19. I saw no bug attack dreams after 9/11; they seem to be the definitive metaphor now partly because of how we use the word ‘bug’ to mean a virus or other illness. Dreams often represent words with visual images in pun-like fashion. At a deeper level, though, the fear of numerous tiny entities that cumulatively might harm or kill you makes a perfect metaphor for the threat of Covid-19.

Other categories of dreams unique to this epidemic are invisible monsters and barely visible clouds of deadly smoke or fog. As with the bugs, these seem related to the unseen nature of the threat posed by the virus (which can nevertheless still harm or kill us) in contrast to the crashing planes, invading armies or more apparent threats that were seen in dreams during other periods of crisis.

Secondary effects of the pandemic

As the pandemic wore on, the survey shows, dreams shifted toward representations of the pandemic’s secondary effects. People who were sheltering alone tended to have dreams of exaggerated loneliness: “I dreamed I was put in prison—solitary confinement. When I would hear guards outside my door, I would ask what I’d done and when I would be released but no one ever answered.”

Those sheltering with family or roommates dreamed exaggerated scenarios of crowding and lack of privacy: “I woke up (not for real) and found my apartment filled with everyone from the neighbourhood (in reality, my in-laws are living with us for the pandemic). People had camp stoves going in corners, cots all through each room and I couldn’t find a place to walk or sit.” And for parents, dreams of homeschooling gone awry were common: “I am homeschooling my 10-year-old. I dreamed that the school contacted me to say it had been decided that his whole class would come to my home and I was supposed to teach all of them for however long the school remained closed.”

As workplaces and schools returned to physical settings, the survey showed that a new type of anxiety dream developed. These were often cast as ‘it’s my first day back at work and…’. Dreamers encountered realistic threats such as sickly, coughing co-workers or crowded, unventilated offices. But they also met with fantastical ones: filthy carpets with new rules about taking off shoes at the door, rituals requiring shaking hands with every co-worker. Teachers and parents of school-age children experienced dreams of even more exaggerated threats. In one, the school had aged 100 years during the shutdown, its roof sagged, and a mother was sure it would collapse on her child if they entered. In another, a teacher heard Halloween-like sound effects in her classroom, followed by eyes peering out at her from the bookcases; eventually, the ghosts that had taken over the school chased her down the hallways.

Mask dreams have become steadily more common throughout the pandemic, with dreamers experiencing anxiety caused by others failing to mask or the sudden realisation that one does not themself have a mask on. The survey shows that, as the pandemic wore on, more dreams featured the dreamer as the mask-less one in dreams now more often dominated by feelings of embarrassment or shame than fear; the socialfaux pas became the more emphasised aspect. While the classic dream of appearing naked or inappropriately clothed in public has served as a metaphor for the exposure of some social inadequacy, it is now being without a mask that represents that feeling.

Although negative dreams constituted a majority of those collected, some hopeful, happy dreams were submitted to the survey even from the start and they are greatly increasing of late. Some dreamers invent a cure for the virus themselves or discover that someone else has. Others glimpse a better future with fewer people, one in which whales and dolphins frolic at the shore, or in which the dreamer emerges from quarantine to find “the whales had learned to fly”. Some dream of cleaner water in their local rivers and lakes. One dreamer is in her backyard, which appears as usual, except that now she can see high mountain peaks in the distance; her mother tells her that pollution had hidden these for decades.

I expect to see more evolution in the survey content, particularly more local divergence given the broad differences in vaccine uptake and availability globally, as well as variations in government lockdown and quarantine policies. It continues at: Dreams related to the Covid-19 coronavirus pandemic.

Deirdre Barrett is a dream researcher and lecturer at Harvard University, the author of five books, including Pandemic Dreams, and an artist who creates images inspired by her dreams.

This article first appeared in the RSA Journal Issue 1 2022.