How Did We Get Here?

Are we still a liberal nation? Are we even pretending or aspiring to be one?

Several extraordinary years in politics and public life have shaken Britain’s image of itself as a model of liberal democracy. The status of political parties, the media, and public officials have morphed and shifted as increasingly desperate attempts have been made to contain the impulses of reactionary nationalism within mainstream political institutions. Widening inequality and the expanding role of technology have changed the way we relate to one another, eroding the sense of consensus required for liberal politics to thrive. Momentous public votes and major events have been surrounded by lying and propaganda, once met with shock, but now wearily familiar.

How was the ground laid for this liberal collapse? Professor of Political Economy William Davies reflects on this extraordinary moment as a product of a larger and longer historical context, examining the underlying preconditions for the turmoil through which we’re living, and where we might go from here. How has the UK’s response to the coronavirus pandemic shone a light on the state of its politics? And with injustice more clearly exposed and widely acknowledged than ever, could this moment pave the way for something better?

William Davies is a Professor of Political Economy at Goldsmiths, University of London, where he is Co-Director of the Political Economy Research Centre [PERC]. He is the author of The Limits of Neoliberalism, The Happiness Industry and Nervous States. He writes regularly for the Guardian, London Review of Books and the New York Times.

Katrina Forrester is assistant professor of government and social studies at Harvard University. She is the coeditor of Nature, Action, and the Future, and author of multi-award-winning book In the Shadow of Justice: Postwar Liberalism and the Remaking of Political Philosophy. Her writing has appeared in the New Yorker, the London Review of Books, the Nation, the Guardian, Dissent, the New Statesman, n+1, and Harper’s. 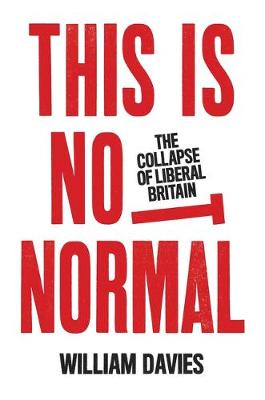 This is not normal