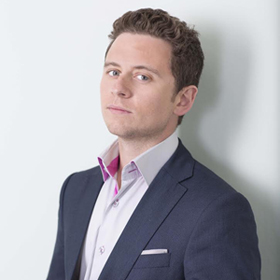 Laurence is the founder and CEO of Pavegen, an innovative clean technology company which manufactures a ﬂooring system that instantly converts kinetic energy from footfall into off-grid electricity and data.

Laurence founded Pavegen in 2009 with the help of a £5K RSA Student Design Award and the company has scaled across the world, installing more than 200 permanent and experiential projects in 30 countries.

A powerful communicator and thought-leader on both technology and entrepreneurship, Laurence has recently presented at London Tech Week, 2017 and Gitex, 2017 - Dubai's leading technology event. Speaking credits also include popular TED talks in Germany, Brazil, USA and the UK and numerous appearances for organisations such as the UK Government's Department for International Trade.

Laurence has attended trade missions in China and Italy with former British Prime Minister, David Cameron, and visited New York and Chicago with the Mayor of London, Sadiq Khan. At the invitation of the UK Government, Laurence spoke at SXSW 2017. He has attended the UN’s +20 Climate Conference, Innovate UK, DMZ 2.0 with Steven Wozniak in South Korea and will be speaking in the UK Pavilion at COP23.