This is part of the RSA’s series of short policy briefings on how to respond to the coronavirus now and build bridges to a better future as part of the recovery.

The government has announced that self-employed workers will be able to access a scheme similar to their plans for the employed, granting them 80% of recent earnings. RSA analysis finds that this does not go far enough, and calls for a basic income to ease the burden on those suffering from economic insecurity: 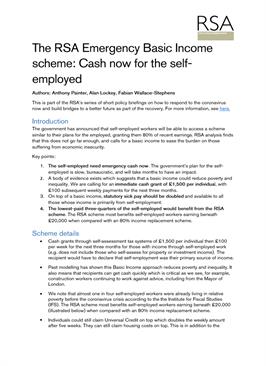