The City Growth Commission will ask how other cities can complement London’s economic success; what political powers and governance arrangements are needed to deliver this; and, how public service reform can start to make other cities become more fiscally sustainable. In assessing these issues, the Commission will focus on skills, infrastructure and devolution of fiscal and policy-making powers.

A new global picture of growth is taking shape. This is not about a transfer of economic power from North to South, or West to East. It is about the rise of cities. The UK is home to one of the world’s truly global cities. But too many of its urban areas outside London are failing to achieve their growth potential.

Globally, growth is increasingly driven by cities. But very few in the UK are at the forefront of the nation’s economy and many are overly dependent on public sector funding. It is clear that our centralised political economy is not fit for purpose.

The UK’s main challenge is to bridge the gap between its capital and the metros beyond. A balanced and complementary system of cities would allow labour and capital to flow more efficiently, helping investors, businesses and households to manage risks and make the most of opportunities. Rather than shrinking or constraining London’s growth, there is a need to enable other cities to grow alongside the capital.

Devolution to metros is ultimately designed to allow places to become more economically and financially sustainable. With increased fiscal autonomy cities will need to accept that the risk of exceeding budget constraints would need to be met locally rather than by central government.

This report recommends the following: 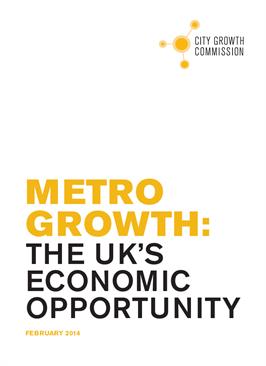