A place for heritage

Commissioned to inform the debate at Heritage Exchange, a new thought leadership event organised in partnership between the Heritage Lottery Fund (HLF) and the RSA, the report warns that many local leaders disregard the potential offered by local heritage when developing their local area’s economic, cultural or social strategies.

As well as a literature review and conversation with national experts in heritage and local government, the project explored these issues through a short but deep dive into three places; Manchester, Stoke on Trent and Plymouth. An early, perhaps unsurprising, finding was significant differences between the places.

More surprising was how those idiosyncratic differences are manifest in attitudes and approaches to ;heritage, with each place displaying a fairly consistent and arguably characteristic focus on one particular strand of the heritage spectrum – be that on historic buildings, on storytelling and folklore, or on passed-down skills and traditions – often to the exclusion or detriment of other strands, and resulting in a sense of imbalance or ‘something missing’.

This led to the idea, which requires further work before it is even testable, of some kind of typology mapping the local approach to heritage. Such a typology might reflect on the scale of material assets (building, parks, museums etc.), on the less tangible – but potentially measurable – degree to which places regard and realise heritage as an asset, the coherence of local heritage organisations as a sector, and the role that those heritage organisations play in local strategic decision making. 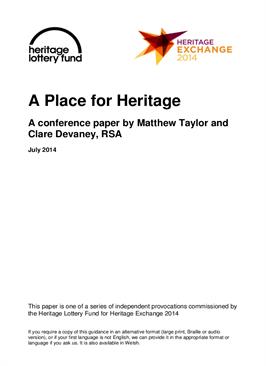