Building the consensus for a People’s Pension in Britain

In the UK, the state pension is the lowest relative to income of any OECD country. We therefore depend on private provision. Yet only 50 percent of employees currently contribute to a private pension. For those who do save, the current system is poor, and savers are often unaware of how costly pensions can be. Reform is needed.

The system of occupational and private pensions in the UK is not fit for purpose. It is not the low cost, trustworthy system which savers justly demand. It needs reform.

This report outlines how the UK pensions system has ended up in such a poor position, and the key questions which policy makers now need to address.

Few dispute these conclusions. Indeed most of the characteristics we suggest can be found in the pension systems of other countries, notably Denmark and Holland. Both are recognised as having one of the most effective pension provisions, and the lowest levels of pensioner poverty in the world.

The report describes what a "best practice" pension system would look like. It calls on the coalition government to build a broad cross party consensus in which political parties, employers, unions, and pension funds agree to implement a ‘pensions architecture’ that brings the UK in line with countries such as Holland and Denmark that enjoy the lowest levels of pensioner poverty in Europe.

The answer to Britain’s inadequate pensions is not just a technical one. It is also a political one. No single agent can create effective occupational pensions. It requires all stakeholders to work together; politicians of all political persuasions; regulators and policy makers; representatives both of employees and employers; advisors, actuaries, academics and think tanks; industry groups and pension providers. 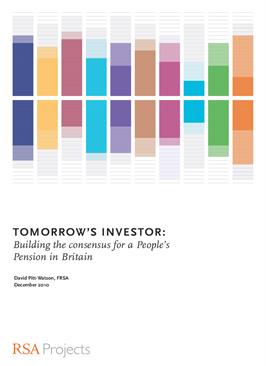