The notion of the ‘Big Society’ has been a major theme of David Cameron’s leadership of the Conservative Party. Essentially the Big Society is the centre right’s cure for a society ‘broken’ in large part by an overbearing state.

Similarly, those on the centre left speak of ‘social recession’ – although they include the excesses of globalisation and power of finance capital, as well as the bureaucratic and managerialist state, in their diagnosis – and the ‘Blue Labour’ campaign borrows heavily from the big society narrative in outlining the importance of civic organisation and action.

The Big Society agenda is nowhere more relevant than in relation to long term care for older people. The Department of Health’s adult social care white paper refers approvingly to the Big Society and what the RSA would term ‘social productivity’, making civic action central to both preventative care and partnership based delivery of personalised care services.  While deficit reduction is part of this agenda, the Government is also acknowledging in some ways that social care is not something that can be delivered by the public sector alone.

In this paper by Craig Berry and Sally Marie Bamford, the focus is not principally on what role central or local government should have in the Big Society of care delivery. Rather, we consider how or whether the big society can deliver care for older people with dementia, given the enormous strain that dementia is placing on traditionally designed public services. It may be more appropriate therefore to refer more widely to ‘social productivity’ as well as the Big Society. In a narrow sense, the social productivity concept is also about enabling non-state actors to do what the state cannot do, or cannot afford to do. In a wider sense, however, it is about recognising the limits of both state and economy in delivering public goods, and as such recognising the essential role of individuals, families and communities in defining social value and determining the interventions that will most effectively bring public goods about.

The first section of this paper considers the ‘zenith’ of long term care, that is, the apparent unravelling of the Beveridge settlement and the de facto positioning of long term care within the private or family sphere. It then looks at dementia in more detail, before outlining how the big society and social productivity concepts may be relevant (or not) to considering how dementia is treated and managed. The paper argues that while dementia is central to the crisis seemingly engulfing public services in the UK – and long term care services in particular – which has given rise to an interest in the Big Society as an aspect of public service reform, it is not clear that a big society framework has been imagined with people with dementia in mind. The more expansive concept of social productivity may be useful in thinking about dementia care beyond the state, although limitations stemming from the nature of dementia syndromes remain. 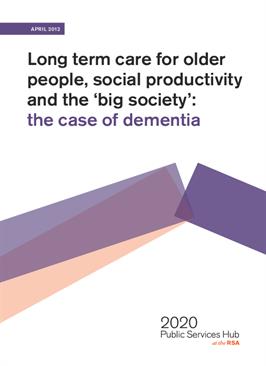