The report identified a vital link between curiosity and innovation, but found that Britons are less hungry for knowledge than they are for experiences, and lack curiosity about their energy usage.

To help harness the power of curiosity in stimulating future innovation, British Gas Generation Green is launching a nationwide search for a panel of 11 children aged 7-14, who are the nation’s most curious and have the ‘why factor’. The children will be invited to work with British Gas experts to create new ideas to address energy challenges.

The RSA research also showed that modern lifestyles could put the curiosity we need to drive innovation at risk. It shows that those over 55 and the retired are the most curious, suggesting that the daily grind could limit our power to innovate. It also found that modern technology is having an impact on our curiosity as it encourages short-term curiosity about a wide variety of topics, but doesn’t promote focus. Both types of curiosity are necessary to stimulate innovation

In response to the findings, the RSA is calling on schools, parents and learners of all ages to cultivate curiosity by: 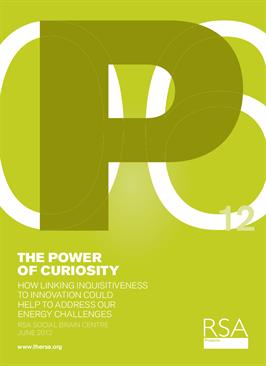