This think piece, commissioned by the British Council, examines what is needed to achieve the government's ambition of creating a world-class education and skills system. It argues that the system of the future needs to move away from more rigid academic models and learn more from the integrated models of learning that are starting to flourish in more vocationally oriented settings.

In difficult economic circumstances, it is even more important that skills and qualifications are aligned with employer and customer demand. Research has highlighted an apparent mismatch between skills gained and those needed in the economy: for example, in 2012, 194,000 hairdressers were trained for just 18,000 jobs, while only 123,000 people were trained for 274,000 jobs in construction. However, the most prevalent issue is not actually skill shortages or skill gaps, but rather the under-utilisation of people’s skills, which affects between 35 and 45 percent of the workforce.

Recent governments have pledged to achieve prosperity for all citizens by becoming a ‘world leader’ in skills, with the aim of promoting growth, prosperity and employment, at the same time as breaking cycles of poverty and inter-generational disadvantage.

By comparison to other nations (such as the Pacific Asian societies), people in the UK are more likely to see people’s abilities as static or innate, rather than open to growth and development. The mindset partly accounts for the long-standing socio-economic gap in pupil attainment at all stages of English schooling. British attitudes also reveal a lingering anti-entrepreneurialism, from which enterprise is still compared unfavourably to the professions. This stems in part from a deep-rooted preoccupation in English schooling with core academic knowledge.

Continued confusion about the objectives of vocational education helps explain why vocational pedagogy has for so long been under-researched and under-theorised.

The current dearth of research on vocational education urgently needs to be addressed, through a systematic programme of research to investigate the effectiveness of different models and approaches.

Improving the quality of vocational teaching and learning is a second key priority. Achieving excellent outcomes, particularly for the most disadvantaged students, demands investment in professional-level qualifications, training and employment conditions for the workforce.

In addition to excellent teachers, innovation and success depend on genuine collaboration to generate new ideas, inspired by real-world problems and solutions.

To be truly innovative and ‘world class’, the system of the future needs to learn more from the integrated models of learning that are starting to flourish in more vocationally-oriented settings, whilst steering away from more rigid academic models that fail to capture the richness of human needs and capacities. 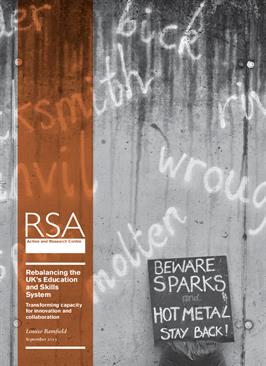